In a sign of progress amid ongoing challenges to manufacturing, the Federal Reserve reported that industrial production increased slightly in September. Although it was the third gain in four months, output remained down 1% from the same time last year. Manufacturing production rose more than analysts expected despite the strong dollar and weak global growth. Declines among utilities and mining operations held back total output. Capacity utilization rose slightly to 75.4%, down from the 43-average of 80%. That suggests that inflation is not imminent.

The broadest measure of inflation stayed subdued in September, allowing the Fed continued flexibility in the timing of its next interest rate lift. The Consumer Price Index nudged up 0.3% from August, largely because of higher gas prices, the Bureau of Labor Statistics reported. Excluding volatile energy and food prices, core inflation rose 2.2% from September 2015, which is around the rate targeted by the fed, but it was down from 2.3% in August.

Based on the third quarter Consumer Price Index, Social Security payments will rise 0.3% in 2017, the Social Security Administration said. As a result, the average monthly benefit for a retired worker will go up by $5 to $1,355. 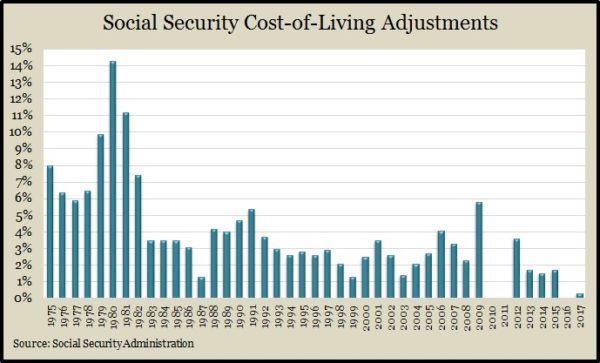 The pace at which American started making houses fell in September to the lowest level in a year and a half, according to the Department of Commerce. Housing starts were on a 1.05 million unit annual pace, down 11.9% from September 2015, although construction of single-family residences rose, and the overall level remained about where it was before the financial collapse in 2008. The same report shows an encouraging increase in building permits, which rose at the fastest pace in 10 months.

The moving four-week average for initial unemployment claims rose for the first time in nine weeks after hitting its lowest level in nearly 43 years. The average remained 30% below the 49-year average and is on a streak not seen since 1970, according to Labor Department data. The persistently low applications suggest employers don’t want to downsize their work forces.

Historically low levels of unemployment claims, the rise in building permits and the spread among interest rates contributed to a slight gain in the Conference Board’s Leading Economic Indicators for September. The business research group said the six-month growth rate of the index suggests continued moderate economic growth at least through early 2017. Negative indicators included weaknesses in stock prices and the average number of hours employees work per week.

The U.S. housing recovery showed renewed signs of life in September, with the annual pace of existing homes rising for the first time in three months. The National Association of Realtors said sales in the biggest segment of the housing market rose 3.2% from the August rate and were up 0.6% from the year-ago rate. Inventories remained tight, down 6.8% from the same time last year, which contributed to the 55th consecutive month of year-to-year price increases.