Aside from some at least temporary effects from recent Gulf Coast hurricanes, U.S. economic data continued to show little buildup for inflation. The Federal Reserve reported that industrial production gained in September for the first time in three months, led by a rebound in output by utilities. The Fed, which has been watching for signs of inflation to help justify boosts in short-term interest rates, estimated that hurricanes Harvey and Irma held back production by a fraction of a percentage point. The same report showed capacity utilization, a leading indicator of inflationary pressure rose slightly from August but stayed well below the long-term average. 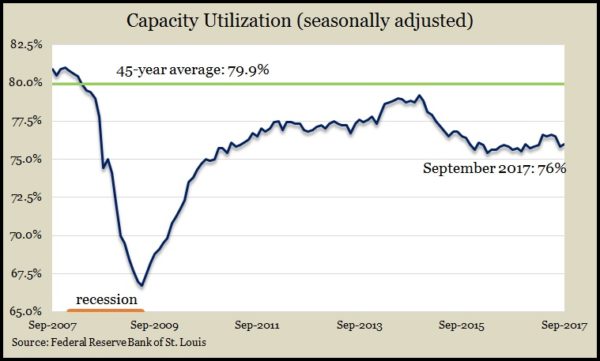 The pace of home building stalled in September, declining to the slowest pace in a year, according to the Department of Commerce. Housing starts were on a 1.1 million-unit annual pace, down for the third month in a row, although much of the slowdown was from the South. The rate remained above recessionary levels but was far below the 2005 peak. The same report – whose figures are volatile month-to-month – also showed a recent plateauing in the rate of building permits issued. That suggests a continued moderate pace in housing starts, which Realtors say is not keeping pace with demand.

The moving four-week average for initial unemployment claims fell for the third week in a row and was down nearly 11% after a 16% rise following the Gulf Coast hurricanes. Still, the leading indicator of firings and layoffs remains 30% below the 50-year average, where it has been hovering each week since the beginning of 2013, according to Labor Department data. That suggests employers continue to be reluctant to let workers go, a sign of strength in the labor market that appears to be overcoming temporary turbulence from the hurricanes.

The Conference Board said its index of leading economic indicators declined in September for the first time in a year, mostly because of hurricane effects on weekly jobless claims and building permits. Most other indicators continued to trend positively, though, so the business research group projected “solid growth” in the U.S. economy progressing through the second half of the year.

Hurricanes also continued to cut into existing home sales in September, but the ongoing impediment is lack of inventory, according to the National Association of Realtors. The annual pace of sales rose 0.7% in September to 5.39 million houses, the trade association said. It was the first gain in four months and was 1.5% behind the September 2016 rate. The supply of houses for sales – especially on the low end – is failing to keep up with demand, the group said, which has been pushing prices too high for too many prospective home buyers. The median sales price rose to $245,100, up 4.2% from September 2016, for the 67th consecutive year-to-year increase.