Housing prices continued to accelerate in July, according to the S&P CoreLogic Case-Shiller home price index. The 20-city composite index showed a 3.9% price increase from the year before, up from 3.5% in June. While data for the Detroit area was lagging, 16 of the other 19 cities had a higher growth rate than in June. An analyst with the survey said price growth acceleration that started in August 2019 might be resuming after pandemic-related stalls in May and June.

The Conference Board reported a greater-than-expected rise in consumer confidence in September, increasing to 101.8 from a reading of 86.3 in August and declines in both June and July. The business research group noted that confidence remained below pre-pandemic readings, which exceeded 130 in January and February. Consumer confidence is watched as a precursor of consumer spending, which generates almost 70% of U.S. gross domestic product.

The U.S. economy sank at a record 31.4% annual pace in the second quarter, according to the final estimate of the gross domestic product. The Bureau of Economic Analysis said the setback included a 33.2% annualized drop in consumer spending led by cutbacks in purchases of health care, clothing and footwear. The previous estimate of consumer spending was even more severe but was offset in part by downward revisions in exports and business investments.

Demand for existing houses rose 8.8% in August to the highest level in data going back to 2001, according to the pending home sales index of the National Association of Realtors. An economist for the trade group cited low mortgage rates for spurring contract signings for four consecutive months. He also noted low inventories and resulting price increases to suggest that record pending sales will not necessarily translate into record sales.

By far the biggest driver of the U.S. economy, consumer spending continued recovering, although at a slower rate in August. The Bureau of Economic Analysis reported that personal consumption rose at an annual rate of 1% while personal income declined 2.7% because of reduced payments for unemployment insurance. Adjusted for inflation, consumer spending was up 17% from where it had plunged in April, the first full month of the pandemic. Spending remained 4% below where it stood prior to the current recession. 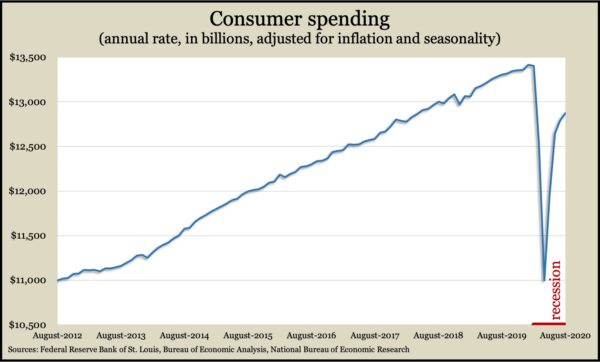 The four-week moving average for initial unemployment claims declined for the 22nd time in 23 weeks but stayed more than triple the 50-year low set in February as the recovery in layoffs lost steam. The Labor Department reported 26.5 million Americans receiving unemployment benefits, including special pandemic assistance. The number of recipients was up from 1.4 million at the same time in 2019.

The Institute for Supply Management reported that its manufacturing index signaled expansion in September for the fourth month in a row, although at a slower pace. Based on surveys of purchasing managers, the index suggested slower growth for new orders and production while indicating that customers’ inventories were low enough to spur greater activity. A component for manufacturing employment pointed to contraction for the 14th month in a row.

The annual pace of construction spending rose 1.4% in August, led by home building. According to the Commerce Department, outlays for building projects were up 2.5% from the year before, but totals were still below the February peak by 9%. Private spending on construction outpaced the public sector for the month but government expenditures rose faster year to year.

U.S. payroll gains slowed in September with the fifth monthly increase but at the lowest rate so far. The Bureau of Labor Statistics showed the number of jobs still 10.7 million below where they were before the pandemic and about as low as they were five years ago. The unemployment rate improved to 7.9% from 84% in August and 14.7% in April but overshadowed the 50-year low of 3.5% in February. Part of the lower unemployment rate in September came from nearly 700,000 people leaving the labor force. The number of permanent job losers rose for the seventh month in a row.

The University of Michigan’s consumer sentiment index rose to its highest level in six months, mostly because of improved outlook for the national economy. An economist with the survey said optimism was greatest among upper-income households and disparities could widen without further economic stimulus. He cited two uncertainties looming over consumers: Questions about a COVID-19 vaccine and when/how the presidential election would be decided.

A report from the Commerce Department showed manufacturing orders gaining at a slower rate in August. The value of orders rose 0.7%, down from gains exceeding 6% in each of the previous three months. Compared to the year before, factory orders were down 9.2%. A proxy for business investments gained 1.9% from July and was behind the year-ago amount by 1.4%.