In a separate report, Commerce said business inventories rose 0.5% in August, keeping pace with the increase in sales. Increased inventories contribute to economic growth, but companies don’t want supply to get too far ahead of demand or they could risk wasting production. Since August 2017, inventories rose 4.2% while sales gained 7.8%, suggesting businesses are having to play catch-up with demand.

The Federal Reserve reported that industrial production rose 0.3% in September, up the fourth month in a row, though down from 0.4% in August. Manufacturing output, the largest component, rose 0.2% The same report showed capacity utilization, a leading indicator of inflationary pressure, unchanged from August, though manufacturing capacity rose for the fourth month in a row. Capacity utilization stayed at 18.1% of all production facilities in use, still below the 79.8% average since 1972.

U.S. employers had a record number of job openings in August, based on annual rates from Bureau of Labor Statistics dating back to 2000. The 7.14 million openings rose from the previous record of 7.08 million in July and continued to outpace the number of unemployed Americans – those not working but looking for jobs. As further evidence of the tight labor market, the rate of private-sector workers quitting their jobs remained at a 17-year high. 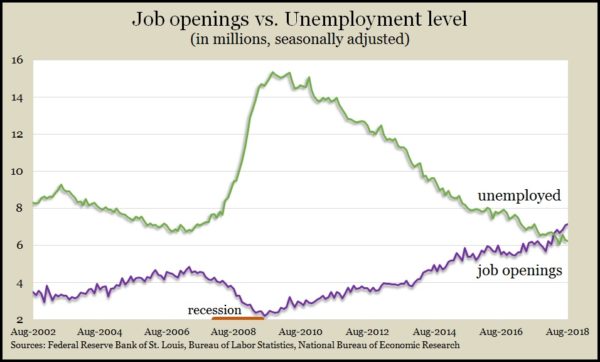 The pace of home building slowed in September, another sign that the housing market faces challenges. According to the Department of Commerce, housing starts were on a 1.2 million-unit annual pace, down 5.3% from August’s rate but up 3.7% from September 2017. The rate remained above recessionary levels but still little more than half the peak in 2006. The pace of building permits for future housing construction also declined, according to the report. At an annual rate of 1.24 million permits, September’s pace dropped to its lowest level since May 2017.

The four-week moving average for initial unemployment claims rose for the fourth week in a row after hitting a 49-year low. The indicator of firings and layoffs was 40% below the 51-year average, where it has been each week since the beginning of 2013, according to Labor Department data. Low claims suggest a persistent reluctance by employers continue to let workers go, which should embolden consumers to spend more.

The Conference Board said its index of leading economic indicators rose 0.5% in September, up from 0.4% in August but down from 0.7% in June and July. The business research group said capacity constraints and the tight labor market might cramp U.S. economic growth. It forecast GDP growth of 3.5% through the end of 2018 but projected a slowdown beginning in 2019.

The most damning sign of the housing market’s recent challenges is the decline of existing home sales, which continued in September for the fifth time in six months, according to the National Association of Realtors. The trade association’s index showed September sales dropping to an annual rate of 5.15 million houses, the lowest in almost three years. An economist for the Realtors blamed increasing mortgage rates and a lack of affordable houses, even though inventory overall gained from the year before.