Retail spending rose for the third month in a row in September, fueling hope that consumer spending can at least sustain the lackluster economy. The Commerce Department reported the best back-to-back months of retail sales in nearly two years, showing broad gains across store categories. However, the increases also reflected higher prices paid for food and gasoline.

In a separate report, Commerce said businesses built up more inventories in August,  only slightly outpacing the growth in sales. That suggested companies are staying relatively lean, which could result in upcoming increases in production and maybe even hiring as soon as customer demand improves.

Higher gas prices helped push up inflation in September, with the Consumer Price Index rising more than analysts had expected. Increased costs for both energy and food eased a bit from August, according to the Bureau of Labor Statistics. Inflation over the last 12 months amounted to 2%, which the Federal Reserve has targeted as a safe rate.

More evidence of a housing comeback emerged from a Commerce Department report showing September housing starts at the highest annual rate in four years. Single-family houses went up at a rate 11% higher than August and 43% higher than in September 2011. Building permits, which indicate future housing plans, also hit their highest rate since July 2008. 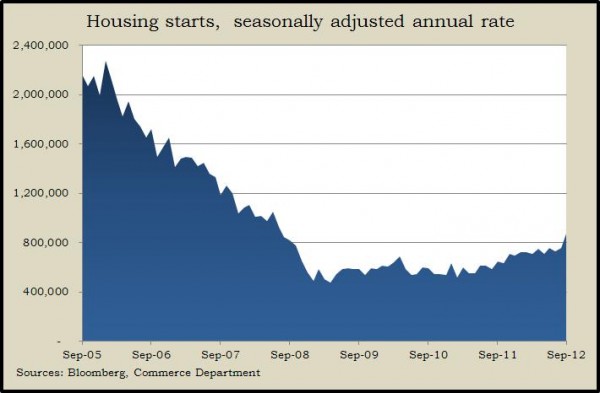 The four-week average for initial unemployment claims rose for the second time in three weeks but remained near the two-month low, according to new Labor Department data. The average has hovered below the critical 400,000-claim level for nearly a year but hasn’t dipped much lower, suggesting continued slow progress in the hiring market.

The Conference Board’s index of Leading Economic Indicators rose in September by the biggest margin since February. Of 10 indicators, six suggested further growth for the U.S. economy. Housing and financial measures boosted the index while weak consumer demand and weak business investment continued to moderate the growth rate.

The National Association of Realtors said existing home sales fell slightly in September top the second-highest level since the homebuyer tax credit stimulus in 2010. Low mortgage rates and improving consumer confidence are accelerating demand at the same time declines in foreclosures are lowering the inventory of houses on the market. As a result, the median price for a house rose 11% from September 2011, providing further evidence that housing is making a recovery.