The Commerce Department said retail sales declined in September for the first time in seven months. Sales fell 0.3%, with seven of 13 retail categories shrinking, led by car dealers, building supply centers and gas stations, which were affected by lower prices.

Year-t0-year, retail sales grew 4.1%, below the long-term average of 4.3%. Consumer spending accounts for about two-thirds of the U.S. gross domestic product.

In a separate report, Commerce said business inventories were unchanged in August, lagging a 0.2% increase in sales. Increased inventories contribute to economic growth, but companies don’t want supply to get too far ahead of demand. Since August 2018, inventories rose 4.2% while sales gained only 1.1%.

The four-week moving average for initial unemployment claims rose for the fourth week in a row, though still hovered near a 50-year low. The indicator of firings and layoffs was 39% below the 52-year average, where it has been under each week since 2013, according to Labor Department data. Low claims suggest a persistent reluctance by employers to let workers go, which should embolden consumers to spend more.

The Federal Reserve reported that industrial production fell 0.4% in September, down for the second time in three months. Manufacturing output, the largest component, declined 0.5%, held back by a production worker strike at General Motors Co. Excluding automotive production, output both for factories and industries overall fell 0.2%, reflecting global economic slowdown and trade tensions. The same report showed capacity utilization, a leading indicator of inflationary pressure, slipping to 77.5%, further below the 79.8% average since 1972.

The pace of home building slowed in September, though volatile data suggested positive developments for single-family housing. According to the Department of Commerce, housing starts were on a 1.26 million-unit annual pace, down 9.4% from August’s rate but up 1.6% from September 2018. The rate remained above levels just before the recession but were still 45% below the peak in 2006. The pace of building permits for future housing construction also declined, according to the report. The rate for single-family starts and permits continued a months-long climb, which could help address reports of too little housing supply. 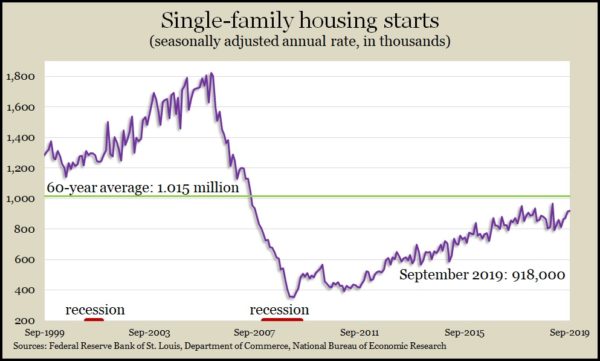 The Conference Board said its index of leading economic indicators shrank 0.1% in September, following a 0.2% decline in August. The business research group said setbacks in manufacturing offset advances in the stock market. It blamed industrial slowdown and trade tensions for creating uncertainty and lowering business expectations. Overall, the index suggested continued slow economic growth into 2020.