Another sign that inflation remains below par came from the Producer Price Index report for September, which showed costs at the wholesale level declining 0.1%. Food and energy costs both got cheaper, the Bureau of Labor Statistics said. Factoring out those volatile categories, wholesale inflation rose 0.2% for the month. Year-to-year, the inflation gauge rose 1.6%, the lowest rate since March and still below the 2% pace that the Federal Reserve has earmarked as a healthy rate for sustainable economic growth.

Consumer spending dipped more than expected in September, according to Department of Commerce figures on retail sales. U.S. merchants registered 0.3% less revenue as automotive sales slumped 0.8% following a 1.9% gain in August. But even aside from volatile motor vehicle sales, retailers experienced a setback in September. Only four of 13 categories gained for the month. Year-to-year, sales grow 4.3%, down from 4.6% in August, which is near the long-term average.

The moving four-week average for initial unemployment claims fell for the fifth week in a row to reach the lowest point since June 2000. Persistently low layoffs – claims have been below the 47-year average for the last seven quarters – suggest employers have been reluctant to let workers go amid moderate economic growth. The latest weekly claims filed with the Labor Department were lower than analysts expected and the fewest since April 2000.

Businesses stocked shelves less than anticipated in August, adding to inventories by 0.2%. Meanwhile, sales dropped 0.4%, Commerce said, and the ratios of inventory to sales remained at a relatively lean level.

Providing hope that manufacturing will continue to further U.S. economic growth, the Federal Reserve reported a gain of 1% in industrial production in September, after a slight decline in August. Utilities led the increase in output, but mining and manufacturing also grew. Industries were using 79.3% of their capacity, the highest rate since May 2008. That’s still shy of the 80.1% long-term average above which inflation becomes more of a concern. 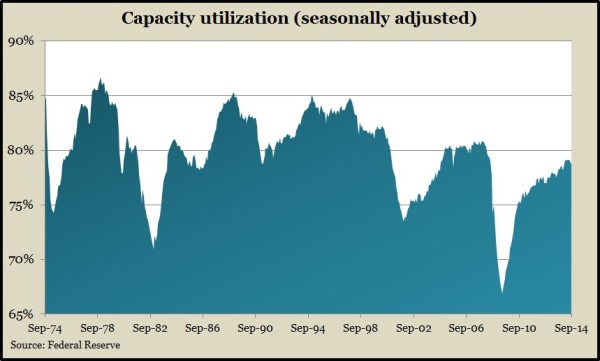 U.S. builders started more houses than expected in September, according to the Commerce Department, although building permits fell below analyst forecasts. The annual rate of housing starts surpassed 1 million for the fifth time in 12 months, led by multi-family housing units. The report suggested further economic contributions from the housing industry, although monthly figures have been erratic.

A preliminary reading of consumer sentiment from the University of Michigan and Thomson Reuters suggested U.S. citizens are more optimistic than at any time since July 2007. Attitudes toward current conditions remained relatively high while expectations for six months hence reached a two-year peak.