The broadest measure of inflation showed prices continuing to recover in September after the recession sparked by the coronavirus pandemic. The Consumer Price Index rose 0.2%, the narrowest of four consecutive monthly gains, according to the Bureau of Labor Statistics. A 6.7% jump in used car prices accounted for most of the increase from August. Since September 2019, overall prices rose 1.4%, up from 1.3% in August and well below the Federal Reserve target of 2% inflation. Over the year, food prices rose 3.9% and energy fell 7.7%. Excluding food and energy prices, the core CPI rose 1.7% from the year before, unchanged from August. Using CPI data, the Social Security Administration announced a 1.3% benefit increase for 2021, about one-third of the average raise since 1975. 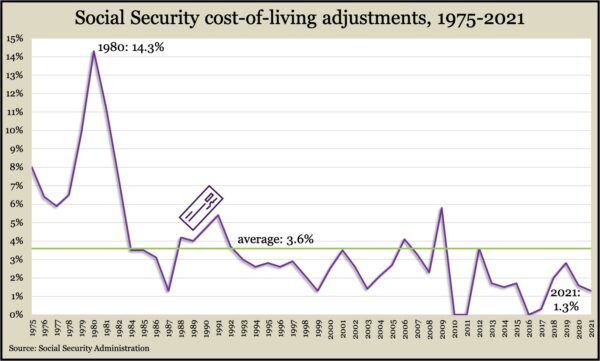 (Read our preview of the Social Security raise here.)

Recovery from the economic collapse in the spring continued to show in wholesale inflation figures from September. The Bureau of Labor Statistics said the Producer Price Index rose 0.4% from August, the fifth increase in a row after declines from February through April. A rise in the cost of trade services such as hotel prices led the gains. The PPI rose 0.4% from September 2019, the first year-to-year gain in six months. Aside from volatile food, energy and trade service costs, the index rose 0.7% from the year before.

The four-week moving average for initial unemployment claims rose for the first time in 11 weeks, signaling a stall in the recovery of labor markets. Claims averaged 866,250, well above the pre-pandemic high, which was 674,000 in 1982. Average claims reached a 50-year low of 208,000 in February. The Labor Department said 25.3 million Americans claimed jobless benefits, up from 1.4 million the year before.

With consumer spending driving about two-thirds of the U.S. gross domestic product, accelerated retail spending in September suggested a continued rebound from the medically induced recession. The Commerce Department said spending at stores rose 1.9% from August, the fifth gain in a row and the steepest rise since May. Electronics and appliance stores were the only category of 13 to have lower sales for the month. Gains were led by sellers of clothing, sporting goods and cars. Year-to-year, retail sales rose 5.4%, but the categories showed how the pandemic has shifted shopping patterns. For instance, online retailers saw sales rise 23.8% from September 2019 while bars and restaurants were down 14.4%. 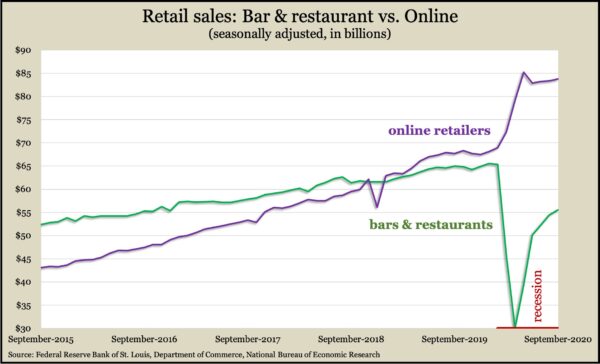 The U.S. industrial sector suffered a setback in its recovery with industrial production declining 0.6% in September, the first dip since April, according to the Federal Reserve. Year-to-year, the output of factories, mines and utilities was down 7.3%. Capacity utilization, a measure of potential inflation, also fell for the first time since April. At 71.5% capacity, industries were above the record low of 64.2% four months earlier but remained short of the mark of 76.9% in February and well below the long-term average of 79.8%, which hasn’t been reached in more than 12 years.

A preliminary October reading of consumer sentiment suggested lower opinions of current economic conditions. Survey research from the University of Michigan showed a continuing rise in expectations, which still remained far below where they were in February. Feelings toward current conditions declined because of slowing job growth, a resurgence in coronavirus cases and the expiration of pandemic relief payments for millions of displaced workers.