Another sign that inflation remains below par came from the Producer Price Index report for September, which showed costs at the wholesale level declining 0.5%. Energy costs in particular got cheaper, the Bureau of Labor Statistics said. Factoring out the volatile food and fuel categories, wholesale inflation was unchanged for the month. Year-to-year, the inflation gauge dipped 1.1% and hasn’t been above zero since December.

Consumer spending barely budged in September, according to Department of Commerce figures on retail sales. U.S. merchants registered 0.1% more revenue as higher automotive and restaurant sales got offset by another slump in gas station tills. Lower sales were broadly distributed with five of 13 retail categories gaining for the month. Year-to-year, sales grew 2.4%, down from a long-term average of 4.5%.

As analysts expected, business inventories were unchanged in August, even as sales declined 0.6%, Commerce said in a separate report. The mismatch between inventories and sales trends got to the highest point since the recession, indicating that companies aren’t keeping supplies in check with demand. The result suggests businesses are not as lean and nimble, which could mean eventual cuts in production and employment.

As an indication of sustainable economic growth, inflation has been lagging the 2% target set by the Federal Reserve Board, and the September Consumer Price Index continued that trend. The broadest measure of inflation from the Bureau of Labor Statistics declined for the second month in a row, led by a 4.7% drop in the cost of energy. Measured year-to-year, the CPI showed no change in inflation. As a result, Social Security benefits will receive no cost-of-living adjustment in 2016. That’s the third time for no raise in the last seven years. 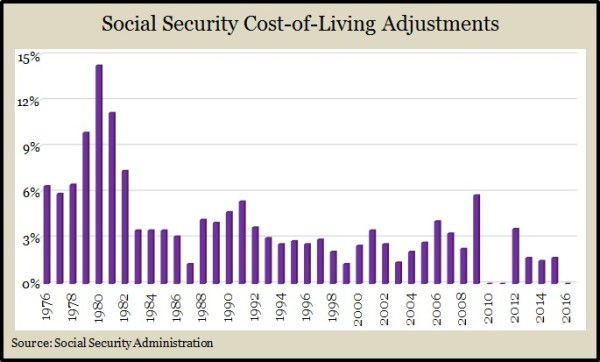 The moving four-week average for initial unemployment claims fell for the fifth week in a row to reach the lowest point since December 1973. Persistently low layoff data from the Labor Department – claims have been below the 48-year average since early 2013 – suggest employers have been reluctant to let workers go amid moderate economic growth.

Reflecting the stumbling growth of economies abroad, U.S. industrial production declined in September for the second month in a row. Federal Reserve data show manufacturing decreasing output for the fourth time in five months as a result of the strong U.S. dollar’s chill on exports. Because of lower commodities prices amid the global slowdown, mining companies cut production by 2% from August and 5.7% in the last year. Industries were using 77.5% of their capacity, the second monthly decline. The long-term average is 80.1%, above which inflation becomes more of a concern.

U.S. employers posted nearly 5.4 million job openings in August, down from the record. 5.7 million in July but still a strong sign of employer demand. The Bureau of Labor Statistics also reported that the quit rate – an indicator of worker confidence in the employment market – remained unchanged for the fourth month in a row. Each month for the last 12 months, between 2.7 million and 2.8 million workers have left their jobs expecting to get hired somewhere else. At its 2009 low point, about 1.6 million workers were voluntarily quitting their jobs.

A preliminary reading of consumer sentiment from the University of Michigan suggests Americans are more optimistic about personal finances and plans for big purchases than at any time since before the Great Recession. Attitudes toward current conditions and expectations for six months hence both advanced from September. An economist with the survey sees concerns over falling commodities prices and the slowdown in China but says consumers are showing more patience with U.S. economic growth.