The Bureau of Labor Statistics said August job openings fell to 5.4 million from what had been reported as a record number of openings in July. The bureau also revised the July estimate lower, which returned the record to April. Employers continued to post openings far above the pre-recession peak of 4.8 million. The rate at which workers are voluntarily quitting their jobs remains about at the level going into the recession. That suggests workers are relatively confident about their prospects of getting hired again.

The moving four-week average for initial unemployment claims reached the lowest point since November 1973. Data from the Labor Department show jobless claims have stayed below the long-term average every week since early 2013. That suggests a persistent reluctance among employers to let workers go, which should help secure jobs and raise wages, fueling consumer confidence and spending. 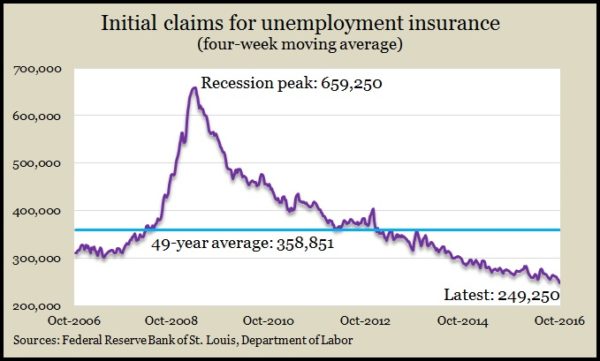 In a sign that the economy could be getting closer to where the Federal Reserve will want to continue raising short-term interest rates, wholesale inflation grew in September. The 0.3% gain from August was the first increase in three months, as was the year-to-year rate of 0.7%, which was the highest since December 2014, according to data from the Bureau of Labor Statistics. The core Producer Price Index (excluding food and energy prices) rose 1.5% in the last 12 months – still below the Fed’s target rate of 2% inflation.

The University of Michigan said its preliminary consumer sentiment reading for October dipped from the end of September, mostly because lower-income households are uncertain about the presidential election. Surveys showed wealthier households at a steady level of confidence for the past 24 months. Households with incomes less than $75,000 a year expressed their lowest optimism since August 2014. An economist with the survey said a “relief rally” following the election could renew confidence, but higher wages and continued low inflation are needed to sustain it.

A prime sign of consumer spending, which drives about two-thirds of U.S. economic activity, advanced about as analysts expected in September as retail sales rose 0.6% from August. The Commerce Department reported higher sales in 10 of 13 categories, including gas stations, which benefited from higher prices. Car dealers, furniture stores, building centers and restaurants were among the beneficiaries. Year-to-year, retail sales rose 2.7%, a faster pace than in recent months but still below the 4.3% long-term pace.

In a separate report, Commerce said business inventories increased slightly in August, at the same rates as sales. That meant the inventories-to-sales ratio was unchanged, still near its level at the end of the recession. Since peaking earlier in 2016, the ratio has come down as companies try to adjust stock piles to more leanly meet customers’ demand.