Consumer borrowing increased at an annual rate of 5% in August, below analyst expectations. The Federal Reserve reported a $13.5 billion gain in consumer credit following a larger increase in July. Borrowing was fueled again by gains in student loans and automotive financing. But for the first time in six months, credit card borrowing declined, signaling lack of confidence among consumers, whose spending drives about 70% of the U.S. gross domestic product.

Job openings rose higher than analysts expected in August, reaching the most unfilled job postings since January, 2001. The Bureau of Labor Statistics reported that the rate of hires declined slightly, but the number of workers quitting their private-sector jobs rose to the highest level since October, 2008. More quitters indicates workers have gained in confidence in their employment prospects. 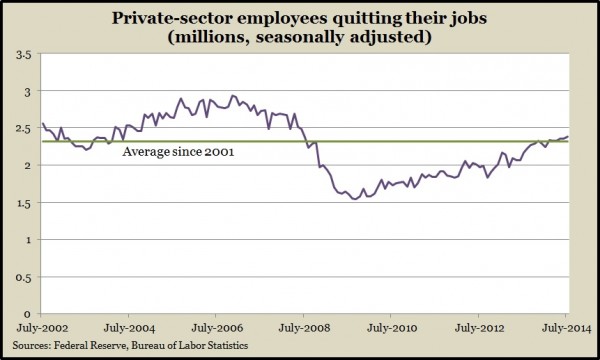 After falling four weeks in a row, the moving four-week average for initial unemployment claims reached its lowest level since February 2006, approaching a 14-year low. Data from the Department of Labor showed average claims staying below the 47-year average each week since the beginning of 2013. That suggests persistent reluctance by employers to let workers go, which has been resulting in a more welcoming hiring market.

Wholesale inventories and sales moved in opposite directions in August, with inventories down 0.7% and sales up 0.7%, the Commerce Department reported. That resulted in the inventories-to-sales ratio rising to its highest level since February, suggesting supply is outpacing demand. The ratio rose even excluding the automotive industry, which led the inventory build.