The Institute for Supply Management said its non-manufacturing index for October signaled continued economy growth, though at a slower pace than in September. The largest sector of the economy saw a slight slowdown in new orders, but employment picked up to the fastest pace since March.

Student loans again contributed to rising consumer credit in September, according to the Federal Reserve. Outstanding credit increased by $11.4 billion from August, which was twice the average monthly increase in the last six years. Credit card debt contracted for the third time in four months, possibly reflecting continued defaults by consumers as well as conservative spending patterns in the aftermath of the Great Recession.

The U.S. trade deficit shrank in September to its narrowest gap in nearly two years as exports rose more than imports. Lighter use of foreign oil played the biggest role in the contraction, according to data from the Bureau of Economic Analysis. But exports showed broad gains, suggesting that aside from the European Union nations, the world is still growing and buying U.S.-made goods. 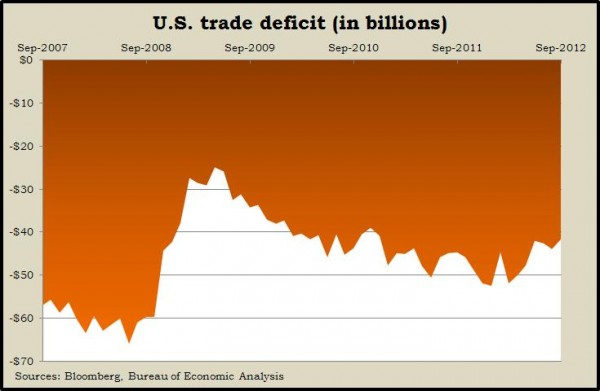 The moving four-week average for initial unemployment claims rose for the third time in four weeks, the Labor Department reported. Although new jobless claims have stayed below the critical 400,000 mark for more than a year, the level has moved little since July.

American businesses showed signs of revival in September as wholesale inventories rose more than analysts expected and sales climbed the most in 18 months. The Commerce Department also reported that the ratio of inventories to sales contracted, suggesting that manufacturers were more closely adjusting production to anticipated demand, which would allow them to operate more efficiently.

A preliminary reading of consumer sentiment for November showed confidence rising for the fourth month in a row, to the highest level since July 2007. Based on surveys that included some respondents after Tuesday’s election, the University of Michigan and Thomson Reuters said the assessment of current conditions as well as the outlook for six months hence both reached points last seen before the Great Recession.