The manufacturing sector continued expanding in October, rising to its fastest pace of growth since September 2018, according to the Institute for Supply Management. New orders grew at the highest rate since 2004. Hiring expanded for the first time in 14 months. The trade group’s index, based on surveys of industry purchase managers, suggested the overall economy expanded for the sixth month in a row after plunging into recession in February.

Housing led a 0.3% increase in the pace of construction spending in September, though it was still 1.8% behind the all-time high annual rate set in February. The Commerce Department reported that residential spending rose 2.7% from the August pace and was up 10.1% from September 2019. Government expenditures on construction projects declined for both periods.

Another sign of manufacturing’s comeback was a 1.1% rise in factory orders in October. Orders remained 4.3% behind February’s level despite five consecutive months of increases, the Commerce Department said. Compared to the year before, factory orders were down 8.4%. Excluding transportation equipment, they were down 5%. A proxy for business investments fell just 0.5% from its year-earlier level.

The U.S. trade deficit shrank 4.7% in September from a near-record gap in August with exports rising 2.6% while imports declined by 0.5%, the slimmest gain since May. The $63.9 billion gap between the value of exports and imports was 33.7% wider than in September 2019, according to data from the Bureau of Economic Analysis. Greater growth in exports suggests improving markets abroad for U.S-based goods and services. Increases in imports reflected a slowing demand by U.S. consumers for merchandise from overseas, including cars and cell phones.

The non-manufacturing sector of the U.S. economy grew in October, although at a slower pace, according to the Institute for Supply Management. The trade group said its non-manufacturing index suggested expansion for the fifth month in a row after contracting in April and May for the first time in 11 years. Purchasing managers surveyed for the index expressed concerns over uncertainty connected with the pandemic, capacity constraints, logistics and elections.

The four-week moving average for initial unemployment claims declined again, dipping below 800,000 after hitting a record high of nearly 5.8 million in April. Still the measure of layoffs was more than double its 530year average and up from a half-century low of 208,000 in February. The Labor Department said more than 21.5 million Americans were receiving jobless relief, down from 22.7 million the week before, but up from 1.4 million a year ago.

The Bureau of Labor Statistics said worker productivity rose at an annual rate of 4.9% in the third quarter, based on a 43.5% gain in output and a 36.8% rise in hours worked. Compared to the same time last year, productivity grew by 4.1%. Since the pandemic, output has dropped 4%, and hours worked are down 7.5%.

The U.S. labor market continued its comeback in October, although at a slower pace, according to payroll data from the Bureau of Labor Statistics. Employers added 638,000 jobs, the thinnest gain in six consecutive months of growth. The unemployment rate declined to 6.9% from 7.9% in September, down from a record 14.7% in April but up from 3.5% in February, the lowest mark in more than 50 years. 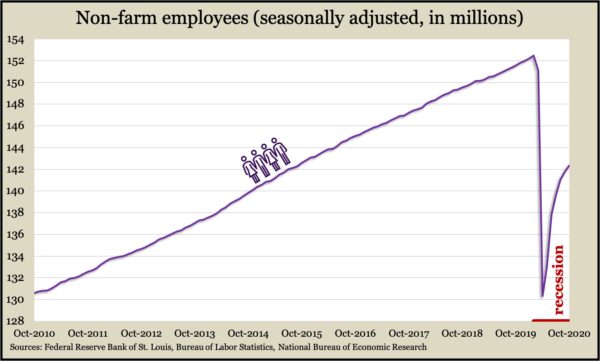