Despite continued growing pains, the manufacturing sector expanded in October for the 17th month in a row, though at a slower rate, according to the Institute for Supply Management. The trade group’s index, based on surveys of industry purchase managers, showed ongoing struggles between rising demand and constraints such as “worker absenteeism, short-term shutdowns due to parts shortages, difficulties in filling open positions and overseas supply chain problems.”

The Commerce Department said construction spending declined slightly in September, though it still hovered near all-time highs, unadjusted for inflation. At a seasonally adjusted annual rate of $1.57 trillion, expenditures were down 0.5% from the August pace and up 7.8% from the year before. Spending on residential construction declined 0.4% for the month and rose 19% from September 2020.

Demand for manufactured goods continued growing in September as factory orders rose for the 16th time in 17 months, though at just 0.2%. Orders declined for the second month in a row for motor vehicles amid ongoing backlogs of microchips. Excluding transportation equipment, factory orders rose 0.7% from August and 14.2% from September 2020, according to the Commerce Department. A proxy for business investments gained 1.4% from August and was up 13.7% from the year before.

The service sector of the U.S. economy grew in October at the fastest rate in 13 years of data from the Institute for Supply Management. The trade group’s service index showed expansion for the 17th month in a row after it contracted in April and May of 2020 for the only time in 11 years. “Demand shows no signs of slowing,” the ISM said, although purchasing managers surveyed reported ongoing challenges from supply chain disruptions, shortages of workers and materials.

The Bureau of Economic Analysis reported the annual rate of motor vehicle sales rose to 13 million in October after five months of decline. Vehicle sales hit an all-time high of 18.3 million in April. Sales covering cars and light trucks bottomed out at 8.6 million in April 2020, the lowest in 45 years of data. Just before widespread shutdowns from COVID-19, the sales pace was 16.9 million. 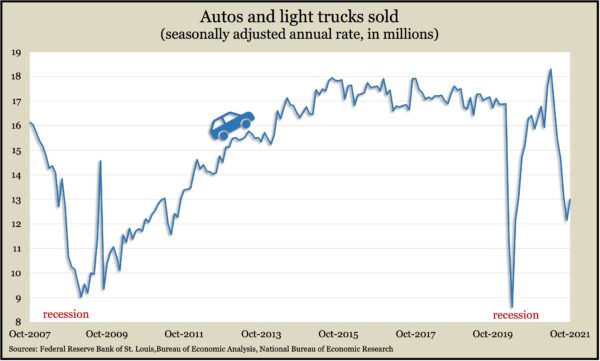 The U.S. trade deficit widened 11.2% in September to a record $80.9 billion, the Bureau of Economic Analysis reported. Imports rose 0.6%, led by capital goods, including computers. Exports declined by 3%, mostly because of a drop-off in shipments of industrial supplies. Through three quarters, the trade gap expanded by 33.1% from the same time in 2020, with the value of imports rising 21.1% and exports rising 17.4%. The net expansion of the deficit detracts from the gross domestic product.

The four-week moving average for initial unemployment claims declined for the fourth week in a row, dropping 18.6% in that time. The level was 23% behind the average since 1967, though it was still 36% above where it stood just before the pandemic. The Labor Department said 2.7 million Americans claimed jobless benefits in the latest week, down 5.5% from the week before. The year before, 27 million workers claimed benefits.

U.S. employers added 531,000 jobs in October, and the unemployment rate dropped to 4.6%, according to jobs data from the Bureau of Labor Statistics. The country continued to recover from historical setbacks from the pandemic-induced recession following stronger hiring in August and September than previously reported. Still jobs remained 4.2 million (2.8%) short of the level in February 2020. While hiring gains were widespread, the leisure and hospitality sector accounted for 31% of new jobs, mostly at bars and restaurants. Even so, leisure and hospitality had 1.4 million fewer jobs (8.2%) than before the pandemic. The 46% unemployment rate was down from a record high of 14.8% in April 2020. In February 2020, unemployment stood at 3.5%, the lowest since 1969. 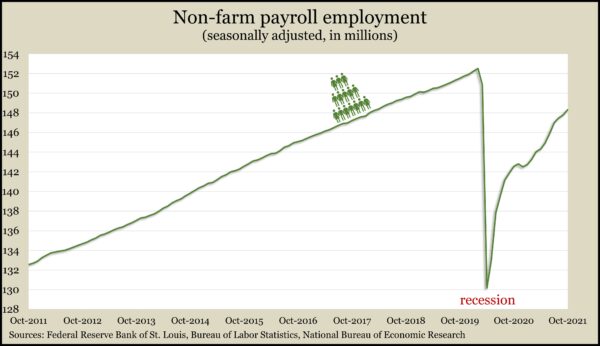