In another sign that housing is becoming more of a tailwind for the sluggish economy, the year-to-year comparison of home prices improved for the sixth month in a row in September, according to the S&P/Case-Shiller index. Home prices gained for the fourth month in a row in the 20-city composite measure. A housing economist for S&P said the industry is in the midst of recovery even during the usual seasonal slowdown.

A measure of manufacturing strength, durable goods orders, barely budged in October, defying analyst expectations of decline amid the weaker global economy. Commerce Department data showed modest gains in demand in most industries, except the volatile transportation sector. Orders for non-military capital goods excluding aircraft – an indicator of business investments – rose the most since May, offering hope that companies were feeling more confident.

Despite the acrimonious presidential election and frets over year-end deficit deliberations, consumer confidence rose in November to its highest point since Feb. 2008. The Conference Board reported that consumers expressed more optimism particularly about job prospects, even though fewer said they expect raises in the next six months. With consumer spending accounting for 70% of GDP activity, analysts consider confidence a leading economic indicator. 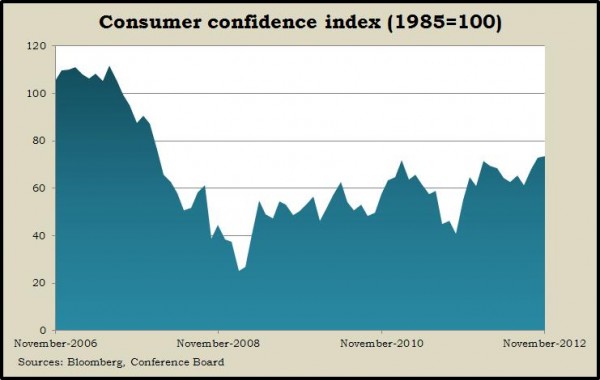 The Commerce Department reported the annual pace of new home sales dropped slightly in October and remained little changed since May. However, the sales rate was up 17% from the same time last year, and the median sales price jumped 5.7% in the same period, reflecting declining competition from foreclosed properties.

The U.S. economy grew at a 2.7% annual rate in the third quarter, up from an earlier estimate of 2% and more than double the 1.3% rate in the second quarter. The Bureau of Economic Analysis said the Gross Domestic Product gained from more spending on housing and business inventories as well as slower imports and the first increase in nine quarters of federal government spending. The report contained a preliminary estimate of corporate income for the third quarter, which showed the financial sector contributing to a record high in corporate profits.

Fallout from Hurricane Sandy continued to settle in the employment sector as the moving four-week average for initial unemployment claims rose for the sixth time in seven weeks and exceeded the 400,000 level for the first time in more than a year. The Labor Department released revised data showing somewhat fewer claims in previous weeks. Still, the hiring market has been stuck in low gear for most of 2012.

The National Association of Realtors said pending homes sales in October reached their highest level since March 2007, aside from a brief surge in 2010 during the stimulus tax credit program. An economist for the trade group said stronger demand is finally taking advantage of affordability factors that include historically low mortgage interest rates.

Hurricane Sandy disrupted personal income and spending in 24 states with an annualized reduction in wages and salaries of about $18 billion, the Bureau of Economic Analysis said. Acknowledging that Sandy is muddling its view of the data, the bureau reported that income overall barely budged for November and personal spending declined. That pushed the savings rate up slightly to 3.3% of disposable income. A key inflation rate that leaves out volatile energy and food prices dipped to 1.6% annually, which could support any Federal Reserve efforts to further stimulate the economy.

Business activity expanded in November for the first time in three months, according to the Chicago purchasing managers index. But new orders shrank again, suggesting that any regional manufacturing rally could be short-lived.