Consumer spending, which accounts for about 70% of U.S. economic activity, rose 1% in September, the biggest gain in eight years, according to the Bureau of Economic Analysis. Automobile purchases drove the higher spending, as Gulf Coast residents replaced vehicles trashed by hurricanes Harvey and Irma. Personal income rose just 0.4% in September, sending the personal saving rate to 3.1% of disposable income, the lowest since December 2007. Also in the report, the Federal Reserve’s preferred measure of inflation showed a year-to-year gain of 1.3%, far from the central bank’s target of 2%.

A leading indicator of consumer spending, consumer confidence, rose in October to its highest level since December 2000, according to the Conference Board. The business research group said its monthly index shows Americans feeling good about the current job market as well as business conditions for at least the next six months. The result suggests continued economic expansion into 2018.

A steady demand for housing amid limited supply continued to push up prices in August, according to the S&P CoreLogic Case-Shiller home price index. The 20-city composite index rose 5.9% from August 2016 with nine of the cities experiencing higher year-to-year gains than July. A housing economist who oversees the data warned that rising prices threaten to narrow the pool of home buyers.

Manufacturing growth slowed in October from a 13-year peak pace in September but still signaled the 14th consecutive month of industry expansion, according to the Institute for Supply Management. Growth included most manufacturing sectors, with 16 of 18 industries reporting expansion. Most components of the trade group’s index kept growing but at a slower pace. New orders, exports and employment stayed at relatively strong levels.

Automotive rebounds from the Gulf Coast hurricanes helped boost motor vehicle sales higher than analysts expected in October. At an annual rate of 18.1 million cars and trucks, October was down 2.6% from September’s pace but 1.2% ahead of the October 2016 pace and 4.6% above the 12-month average. According to statistics from the trade group Autodata Corp., imported trucks continued to have better sales trends than U.S.-made vehicles.

The Commerce Department provided more evidence of the choppy housing recovery, with residential construction expenditures rising 0.02% in September, just below the pace of total construction spending. Spending on residential building accounts for 43% of the total, which remained near record levels without adjusting for inflation. Residential spending, however, was still more than 20% below its pre-recession peak. 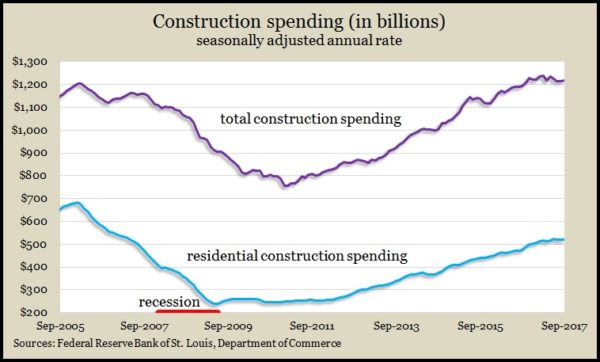 Amid concern over years of flagging worker productivity, the Bureau of Labor Statistics reported more hopeful news in the third quarter of 2016. Output rose at an annual rate of 3.8% July through September while hours worked rose 0.8%, resulting in a productivity gain of 3%. The preliminary estimate is twice the pace of productivity in the second quarter. Year-to-year, productivity rose 1.5%, vs. the average productivity growth since World War II of about 2% a year.

The moving four-week average for initial unemployment claims fell for the fifth week in a row, reaching the lowest level since April 7, 1973. Labor Department data show claims falling 17.2% following a 16.1% rise in the aftermath of the hurricanes. Jobless applications are 35% below 50-year average and show a persistent reluctance among employers to let go of their workers.

Employers added more jobs in October for a record 85th month in a row. In data continued to be affected by the Gulf Coast hurricanes, the Bureau of Labor Statistics said the unemployment rate dropped to 4.1%, the lowest since December 2000. An alternative measure known as U-6 showed underemployment at 7.9%, the lowest level in nearly 11 years. Average hourly wages rose 2.4% from the year before, down from 2.9% – also affected by the hurricanes and the loss and then return of many lower-wage jobs in Texas and Florida.

The Commerce Department said factory orders rose in September for the third month in a row. Excluding the volatile transportation industry, orders rose 5.8% from September 2016. Plans for non-defense capital goods excluding aircraft, a proxy for business investments, rose for the third month in a row and were up 3.9% from the year before. That could be a sign that businesses are investing in productivity again after years of falling behind.