The National Association of Realtors said pending homes sales dipped for the fifth month in a row in October. The trade group partially blamed the federal government shutdown for hampering the sales process but also pointed to low inventory and worsening affordability. The year-to-year change in sales declined for the first time in 30 months.

The government shutdown has complicated data gathering and reporting by many agencies. The Commerce Department released building permit information for both September and October but said it still is behind on housing starts for those months. Permits grew to an annual pace of more than 1 million in October, the highest rate since June 2008. Multi-family units accounted for the bulk of the permits, but builders continued applying for more single-family houses too – a sign that the housing recovery is proceeding.

Another indication of housing’s ongoing comeback is the 13% rise in house prices in the last 12 months, according to the S&P/Case-Shiller index. That’s the widest year-to-year comparison since February 2006, and the index overall rose to the highest level since July 2008. A housing economist for S&P said the industry is showing signs of slowing growth and faces challenges in returning to 2004 peak prices. 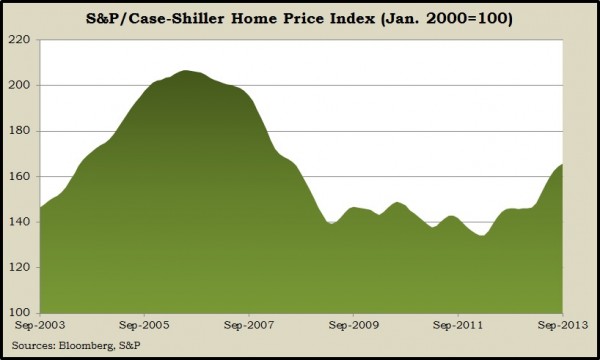 The Conference Board reported that consumer confidence fell in November for the third month in a row – to the lowest level since April. The business research group said consumers’ views of job and earning prospects particularly dimmed for the month, which could make for a “challenging” shopping season.

Employers’ hesitation to let go of workers continued to be apparent from the moving four-week average for initial unemployment claims, which fell for the fourth week in a row and has remained below the 46-year average throughout 2013. The Labor Department reported the moving average dropped to the lowest point since early October.

Americans ended November more upbeat than analysts expected, according to the consumer sentiment index from the University of Michigan and Thomson Reuters. Led by expectations, sentiment rose to 75.1 on the index from 73.2 in October and 72 a couple of weeks ago. The stronger showing suggested consumer spending may be rallying for the prime shopping season.

A basket of leading economic indicators also gained more than expected in November, as the Conference Board reported the seventh monthly increase in its index. The 0.2% increase from October was the lowest since May but follows two strong months and encourages Conference Board economists that the U.S. economy will grow at a quicker pace in 2014, led by the financial, housing and manufacturing sectors.