The annual sales rate of existing houses grew more than expected in October, and home prices kept rising, adding to evidence that the housing industry is becoming a tailwind again for the U.S. economy. Fewer houses sold were from foreclosures, and the median year-to-year sales price increased for the eighth month in a row, the National Association of Realtors said. The trade group estimated that Americans have increased their home equity by $760 billion in the last year, which could help empower more consumer spending.

Further signs of real estate’s revival came from the Commerce Department, which reported that new housing construction rose again in October – to the highest rate since July 2008. With less competition from a glut of foreclosures, building permits indicated continued advances in residential construction, especially in the important category of single-family houses. 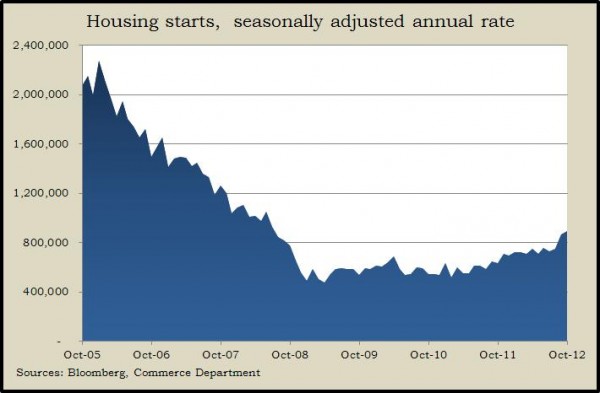 The moving four-week average for initial unemployment claims increased for the fifth time in six weeks to the highest level in a year – just below the pivotal point of 400,000 claims. Aftermath from Hurricane Sandy likely will disrupt economic data for months, according to the Labor Department. But any sign of higher unemployment can be disconcerting, given the taciturn state of the labor market.

With Sandy so far having minimal effects in the data it considers, the Conference Board’s index for leading economic indicators moved up more than analysts expected in October. Housing indeed showed its contributions to economic growth, helping to offset weak consumer expectations, weak industrial orders and weak employment. Conference Board economists forecast more modest growth for the U.S. economy in coming months – but cautioned that fallout from Sandy and the fiscal cliff could interfere.

Another warning about the fiscal cliff came from a University of Michigan economist reporting a five-year high in consumer sentiment. The index from the university and Thomson Reuters actually dipped from its mid-November reading, prompting economist Richard Curtin to point to uncertainty as a cause for slightly diminishing expectations.