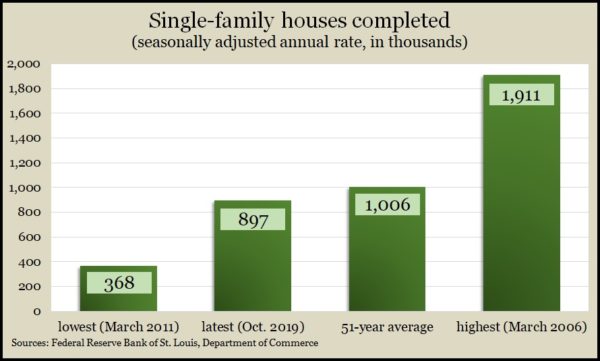 The Conference Board said its index of leading economic indicators declined in October  for the third month in a row. Weak factory orders and signs of a softer labor market contributed to the setback. A six-month measure of the index registered its first decline since May 2016. The business research group said the index suggests a 2019 growth rate of just under 2% for the U.S. economy.

Saying lower mortgage rates and steady employment were encouraging more home buyers into the market, the National Association of Realtors reported that existing home sales rose 1.9% in October. The annual pace of home sales increased to 5.46 million houses, which was up 4.6% from October 2018. An economist for the trade group said the real estate market still faces a shortage of houses for sale, which continued to inflate prices. The median price rose 6.2% from the year before, the 92nd consecutive month of year-to-year increases.

A report from the Labor Department showed the four-week moving average for initial unemployment claims rising for the third week in a row, reaching its highest level since June. The indicator of employer reluctance to let workers go has been below its 52-year average every week since 2013 and is one of the most persistent signals of the tight labor market. Demand for workers should empower more consumer spending, which drives about 70% of the U.S. gross domestic product.

U.S. consumers grew more confident in their personal financial situations than at any time in more than 50 years of surveys, according to the University of Michigan. The school’s consumer sentiment index overall rose to about the average level it has hovered around since the start of 2017. Consumer expectations rose from the previous survey, but feelings toward current economic conditions slipped as more consumers acknowledge that low rates of interest, inflation and employment aren’t going to last forever.