Inflation remained below the Federal Reserve’s sweet spot of 2% in October, according to the Consumer Price Index. The Bureau of Labor Statistics showed the broadest measure of inflation actually dipped from September, thanks in large part to lower energy prices. The year-to-year rate was 1%, the lowest since October 2009. Adjusting for volatile food and energy costs, the core CPI remained at 1.7%, justifying the Fed’s concerns of slow-growing economy. 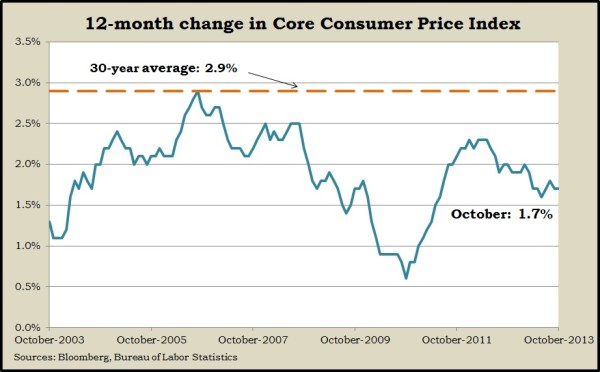 The Commerce Department said retail sales grew 0.4% in October, more than analysts expected, and a positive sign for the U.S. economy to begin the fourth quarter. Consumer spending accounts for more than two-thirds of gross domestic product, and the Commerce report showed broad gains in 10 of 13 retail categories. Over the previous 12 months, only gas stations and department stores had declines in sales, and the drop at gas outlets was because of lower prices.

The annual sales rate of existing houses contracted in October for the third month in a row. The National Association of Realtors blamed an “erosion in buying power” that includes higher mortgage rates and stifled family incomes. A shortage of houses for sale helped drive up the median home price by nearly 13% from October 2012 – the 11th straight month of double-digit price hikes. Even with the recent slowdown, housing sales were at a 6% brisker rate than a year earlier.

A gauge of business confidence gained more than analysts expected in September. Business inventories grew by 0.6%, even faster than they had in August, the Commerce Department reported. Stockpiling outpaced sales, which increased 0.2%, but adjusting for seasonal fluctuations kept the inventories-to-sales ratio at a relatively low level, suggesting businesses are trying to stay lean and not expand too quickly.

The moving four-week average for initial unemployment claims dropped for the third week in a row to the lowest level in five weeks. New applications for jobless benefits continue to be less than the 46-year average, according to the Labor Department. The lack of layoffs are a sign that employers are unwilling to let workers go amid the mild economic expansion.

The leading indicator of inflation on the wholesale level, the Producer Price Index, declined in October, for the second month in a row. Lower energy prices pulled down wholesale costs overall, according to the Bureau of Labor Statistics. Fuel prices fell for the seventh time in the last 12 months, which put the year-to-year wholesale inflation rate at 0.3%. But even excluding volatile fuel and food prices, the PPI rose 1.4% from October 2012, providing further evidence of anemic economic growth.