Declines in the output from mining and utilities pulled U.S. industrial production lower in October. The Federal Reserve reported that manufacturing, however, increased production for the first time in three months, a sign of resilience among American industries amid a global economic slowdown. Domestic demand for such manufactured goods as building supplies and automobiles saved the day. Capacity utilization declined for the second month in a row, indicating less inflationary pressure.

The broadest measure of inflation remained below the Fed’s sweet spot of 2% in October. The Bureau of Labor Statistics said energy prices rose for the first time in three months, giving the Consumer Price Index its first gain since July. In the last 12 months, energy costs have dropped 17%, pulling the 12-month inflation rate down to 0.2%. Excluding energy and volatile food prices, the core CPI rose 1.9% year-to-year, edging closer to the Fed’s target for sustainable economic growth but half the historical average of 3.8%. 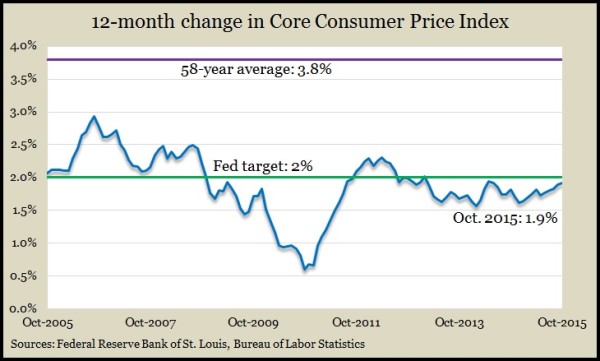 The jagged housing recovery continue in October, with a slower pace of housing starts but a rise in the rate of building permits, suggesting another pickup in activity. The Commerce Department said the annual rate of new house construction fell 11% from September to its lowest level since March but remained on par with housing starts before the recession. The pace of permits quickened from September, with multi-family units going up at a faster pace than single-family, which tend to have greater ripple effects on the economy.

The policy-making Federal Open Market Committee released minutes from its meetings in late October, at which it agreed to keep short-term interest rates near zero. Some analysts saw signs in the minutes that the Federal Reserve might finally start nudging rates back to normal levels when the committee meets again December 15 and 16. (Below is a computer-generated word cloud of the 7,912-word minutes. Words show up more or less prominently, depending on how frequently they occurred.) 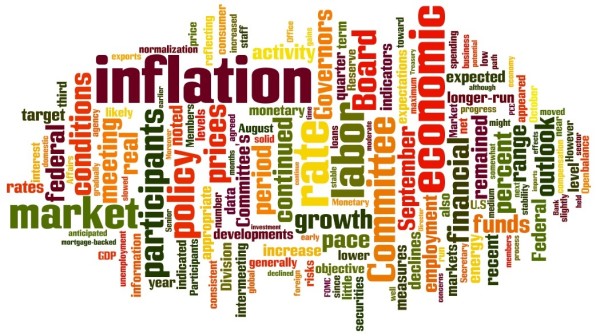 The annual sales rate of existing houses rose in October to its highest point in 13 months. The National Association of Realtors cited lower interest rates, greater inventory for the lift in sales but also noted that the portion of buyers who are first-time homeowners are at a three-decade low.

The moving four-week average for initial unemployment claims rose for the third week in a row after reaching the lowest level since December 1973. New applications for jobless benefits continue to be about 25% below the 48-year average, according to the Labor Department. The lack of layoffs is a sign that employers are unwilling to let workers go, which should help the hiring market, eventually leading to the higher wages that fuel consumer spending.

The U.S. economy should continue moderate growth into 2016, according to the Conference Board’s October index of leading economic indicators. Economists for the business research group said the index gained for the first time in three months largely because of stock prices, yield spreads and building permits. The index level reached its highest point since 2006.