Consumer spending, which accounts for about two-thirds of U.S. economic activity, rose 0.4% in September, a notch shy of the 0.5% gain in August. The Bureau of Economic Analysis reported that spending outpaced income, which lowered the personal saving rate to 6.2% of disposable income down from as high as 7% at the beginning of the year. The Federal Reserve’s preferred measure of inflation gained 2% from the year before, for the second month in a row, just at the central bank’s target level.

The S&P CoreLogic Case-Shiller home price index showed slowing growth in August, another indication that the housing market is losing momentum. The composite index for 20 U.S. cities registered a year-to-year price gain of 5.5%, down from 5.8% in July, with 14 of the 20 cities reporting narrower increases. A housing economist for S&P said high price levels and rising mortgage interest rates might be pushing more would-be buyers out of the market.

A harbinger of personal spending, consumer confidence, rose to its highest level in 18 years, according to the Conference Board. The business research group said strong employment markets are inspiring consumers to feel better about both current economic conditions and prospects for the coming months. The cutoff date for surveys missed the last couple of weeks of stock market sell-offs.

In a possible sign that tight employment markets are beginning to push up pay, the Bureau of Labor Statistics reported that wages and salaries for non-government workers rose at the highest year-to-year level since before the Great Recession. The bureau’s Employment Cost Index showed a 3.1% increase in wages and salaries from the third quarter of 2017 to the third quarter of 2018. Private sector costs of benefits rose 2.5% in the same period, bringing total compensation costs to a four-quarter gain of 2.8%.

Worker productivity grew at a 2.2% annual rate in the third quarter of 2018, according to a preliminary report from the Bureau of Labor Statistics. The gain was down from 3% in the second quarter and was based on a 4.1% rise in output and a 1.8% increase in hours worked. Year-to-year, productivity rose 1.3%, staying below the post-World War II average of about 2%. Weak productivity since the recession has confounded economists, who note that productivity must increase to raise standards of living. Unit labor costs rose at a 1.2% annual rate in the third quarter and 1.5% in the last year.

The four-week moving average for initial unemployment claims rose for the sixth week in a row after hitting its lowest level since December 1969. Labor Department data show average claims were down 40% from the 51-year average in a consistent indication of the high demand for workers and employer reluctance to let staff leave.

The Commerce Department reported virtually no change in the annual rate of construction expenditures in September. The $1.32 trillion spending rate was up 7.2% from September 2017 with residential spending up 0.5% for the month and up 4.9% from the year before. Spending on multi-family housing overshadowed single-family construction and improvement. Holding back spending overall in September was a 0.9% decline in government expenditures.

Manufacturing growth slowed in October for the second month in a row but still signaled the 26th consecutive month of industry expansion, according to the Institute for Supply Management. Growth slowed to the lowest level since April as new orders slowed following 18 months of brisk demand. Most components of the trade group’s index kept growing but at a slower pace. Some purchasing managers cited concerns about global trade tensions.

Employers added 250,000 jobs in October extending the nation’s hiring record to 97 consecutive monthly gains. The pace surpassed the 12-month average of 211,000 jobs. The Bureau of Labor Statistics also said the unemployment rate stayed at 3.7%, the lowest since December 1969. Average hourly wages rose 3.1% from the year before, the highest since 2009, although the year-ago comparison was lower as a result of Hurricane Harvey. A closely watched indicator of the percentage of eligible workers who either have or are looking for jobs remained in a post-recession range that is hovering near 40-year lows. 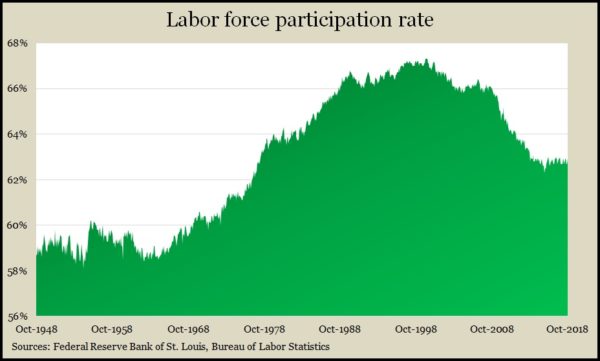 The U.S. trade deficit widened for the fourth month in a row to $54 billion in September. The Bureau of Economic Analysis reported that the trade gap was up 1.3% from August with exports and imports both rising 1.5%. America’s trade deficit with China increased 8.7% as exports rose 4.1% and imports rose 7.9%.

The Commerce Department said factory orders rose in September for the fourth time in five months, adding 0.7%. Excluding the volatile transportation industry, orders rose 7.8% from September 2017. Orders for non-military capital goods excluding aircraft, a proxy for business investments, declined for the second month in a row and continued to lag overall orders, up 6.6% year-to-year.