American consumers spent more in September than they had in six months, in part because of higher gas prices. But overall the fourth monthly increase in spending, as reported by the Bureau of Economic Analysis, offered hope that consumers are ready to play a bigger role in sustaining the weak U.S. recovery, especially as global slowdown affects manufacturing. Spending rose at twice the rate of income for the month, resulting in the lowest saving rate since last November. The report also showed inflation remaining tame, allowing the Fed to continue its attempts to stimulate investing and spending.

The housing market recovery kept gaining momentum in August, according to the S&P/Case-Shiller Home Price Index. The composite index for 20 cities showed a gain in year-to-year house prices for the third month in a row, continuing progressive improvements dating back to December. The 2% annual increase was the most since July 2010, and 18 of the 20 cities had better rates than they did in July. 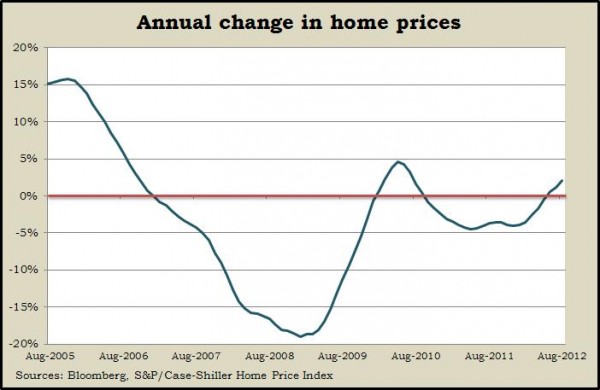 For the second month in a row, following a lapse of three months, the manufacturing sector expanded in October. New orders, production and employment all signaled further growth, the Institute for Supply Management reported. Activity has mostly slowed because of the global economic slowdown, but the trend suggested U.S. manufacturers were holding their own.

A precursor to freer spending, consumer confidence rose in October it its highest level since early 2008. The Conference Board’s index suggested stronger holiday shopping, which could help sustain economic growth while manufacturing is contending with softer global demand. Consumer spending drives about 70% of the economic activity in the U.S.

Americans bought an annual rate of 14.3 million cars and trucks in October, down 4% from September, according to the industry group Autodata Corp. The first decline in auto sales in three months may be an early indication of economic disruption from Hurricane Sandy. Analysts said before weather forecasts projected the storm’s devastation, dealers were on pace for a 14.8 million-vehicle annual rate.

Employers added more jobs than expected in October, pushing the monthly average of gains so far this year beyond the rate for 2011. Although the nation remains about halfway back from the peak payroll count of more than four years ago, the report from the Bureau of Labor Statistics suggests the pace is picking up from recent months. Government employment declined for the month. Private-sector hiring was the most since February. The unemployment rate nudged up to 7.9% from 7.8% in September.

A slowdown in global expansion was less apparent in a Commerce Department report showing factory orders rising 4.8% in September, higher than analysts forecast. It was a bounce back from a drop of 5.1% in August. Excluding the volatile transportation sector, orders still registered a 1.4% gain.