Retail sales continued broad gains in October, rising 1.7% from September and up 21.4% from just before the pandemic. Other than a decline for clothing stores, sales rose in October for each of the 13 retail categories. Online retailers, gas stations, appliance stores and home-and-garden centers led the gainers. Overall retail sales remained above their pre-pandemic level for the 16th month in a row, according to Commerce Department figures. Sales for bars and restaurants, which were hard hit by lockdowns at the onset of the pandemic, stayed above their pre-pandemic mark for the seventh consecutive month. 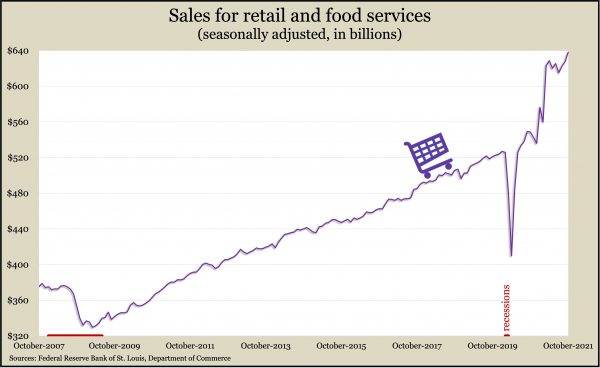 The Federal Reserve reported a 1.6% gain in industrial production in October, finally pushing output above its level in February 2020, just before the pandemic. The increase followed a 1.3% decline in September, resulting from Hurricane Ida. Automakers accounted for half of the 1.2% production rise in manufacturing. Industries’ capacity utilization rate, an early indicator of inflation, rose for the sixth time in seven months, to 76.4%, just barely above the February 2020 rate. It remained well below the long-term average rate of 79.6%.

Housing construction data signaled mixed results in October, as the annual pace of building permits and housing starts receded from 15-year highs reached earlier in 2021. The annual rate for starts declined 0.7% from September to 1.5 million houses but was up 0.4% from the year before. Notably, completions of single-family houses were down 17% from a recent peak in March, though they were still on pace with early 2008, according to data from the Commerce Department. The annual rate of building permits rose 4% in October and was 3.4% ahead of the year-earlier rate. Interest in housing of five units or more helped boost the pace of permits.

The four-week moving average for initial unemployment claims declined for the sixth week in a row, sinking 27% below the 54-year average. Labor Department data showed the four-week average at 272,750 applications, still 30% above where it was just before the pandemic. The average was down from a record high of 5.3 million in April 2020. Total claims rose to 3.2 million, largely because of backdated figures from California tied to pandemic relief programs that expired in September. Total claims reached 20.8 million the year before.

The Conference Board said its leading economic indicators rose again in October, up 0.9% after gains of 0.1% in September and 0.7% in August. The business research group said eight of the 10 components of its index contributed to the measure’s rise; only the average workweek and consumers’ outlook detracted. Despite possible headwinds from rising prices and supply chain bottlenecks, the Conference Board forecast a 5% annual growth rate for GDP in the fourth quarter and a “still historically robust” 2.6% in the first three months of 2022.