A chief indicator of consumer spending, retail sales slumped 0.2% in October, the Commerce Department reported. But temporary effects from Hurricane Sandy probably tempered shopping, especially in automotive, where industry officials said bad weather dampened visits to dealerships. One possible positive sign was that September sales rose more than previously estimated. As the chart below indicates, seasonally adjusted sales have rebounded since the recession. 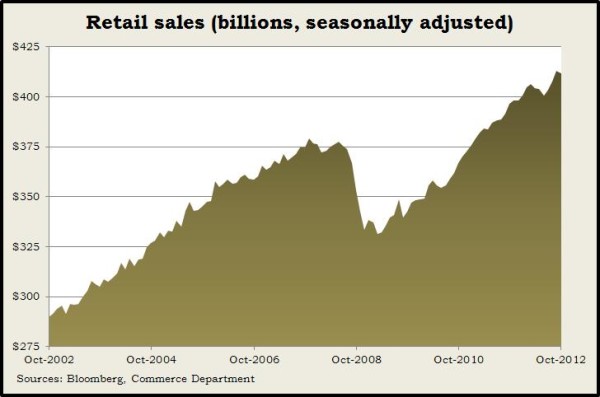 Businesses stocked shelves at a faster rate than analysts expected in September, although still at a comfortable pace behind sales, Commerce said in a separate report. Business inventories fell a bit in relationship to sales. That tends to be a sign that manufacturers are keeping up with growing demand while not getting too far ahead, which could result in increased hiring as supplies run low.

A slowdown in global economic growth has diminished demand for commodities, lowering prices on the wholesale level in October. The Producer Price Index dipped for the first time since May, according to the Bureau of Labor Statistics, led by a 2.2% decline in gasoline costs. Core wholesale inflation, which leaves out volatile food and fuel prices, dropped for the first time in nearly two years. The government said the data reflected no effects yet from Hurricane Sandy.

The moving four-week average for initial unemployment claims increased for the fourth time in five weeks as Hurricane Sandy sent weekly applications past the 400,000 level for the first time in 13 months. Although any widespread economic fallout is expected to be temporary, the Labor Department report served as another reminder of the fragile state of America’s employment market.

The broadest measure of inflation, the Consumer Price Index, showed that economic growth remained slow in October. The Bureau of Labor Statistics said core inflation rose 2% from October 2011, which is right where the Federal Reserve sees a balance between its attempts to stimulate the economy and the dangers of possibly triggering rampant price hikes.

U.S. industrial production and utilization suffered in the wake of the hurricane in October, the Federal Reserve said. Output declined for the second time in three months, although the Fed estimated that it would have increased slightly if not for the disruptions from Sandy. Manufacturing had led the country’s expansion out of the Great Recession, though its role has diminished much of this year because of slower growth in the global economy and the recession in Europe.