The broadest measure of inflation, the Consumer Price Index, rose 0.4% in October, led by a 3.7% jump in gasoline prices. Excluding the volatile categories of food and energy, the CPI rose 0.2%, the Bureau of Labor Statistics reported. The general index grew 1.8% since October 2018, including a 4.2% decline in energy prices. Core prices rose 2.3% in the last 12 months—lower than analysts expected and down from 2.4% in September.

The four-week moving average for initial unemployment claims rose for the second week in a row. The Labor Department indicator is 38% below the 52-year average, continuing to hover near the lowest level since 1969. The measure suggests employer reluctance to let workers go, reflecting a tight labor market that should be encouraging more consumer spending. Personal expenditures drive about two-thirds of U.S. economic activity.

Inflation at the wholesale level rose 0.4% in October, boosted by higher energy prices. The Producer Price Index rose 1.1% from October 2018, the lowest increase in three years, according to the Bureau of Labor Statistics. Excluding volatile costs for food, energy and trade services, the core index rose 0.1% for the month and 1.5% for 12 months, also a three-year low.

A key measure of consumer spending—retail sales—grew less than analysts expected, in October. The 0.3% gain offset a 0.3% loss in September. Price increases helped  gas stations lead the six of 13 retail categories with higher sales in October, according to the Commerce Department. Year-to-year declines included electronics stores, building centers, gas stations and clothing stores. Retail sales rose 3.1% from October 2018, which is below the 22-year average annual rate of 4.3%. A three-month comparison shows retail sales picking up from mid-2019 both overall and in most categories.

The Federal Reserve reported that industrial production declined in October for the second month in a row and the third time in four months. A strike by General Motors autoworkers held back factory output, but even excluding motor vehicles, manufacturing continued to contract. Meantime, capacity utilization fell to 76.7%, the lowest level since September 2017, suggesting little pressure for higher inflation. U.S. industries have not surpassed the long-term average of 79.8% capacity since April 2008. 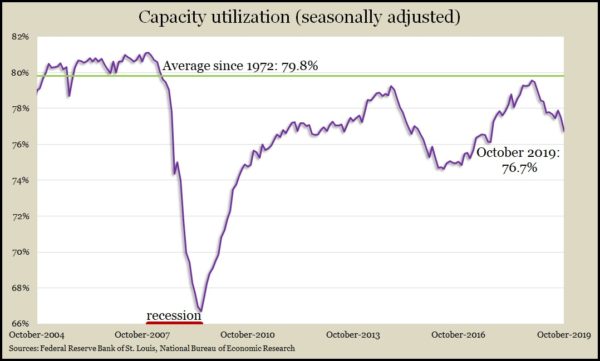