The Commerce Department said wholesalers increased inventories in September at the same rate at which their sales rose. Year-to-year, though, inventories rose 4.7%, compared to a 3.9% decline in sales. The tell-tale inventories-to-sales ratio remained at the highest level since the recession, suggesting a mismatch between supply and demand that could hamper production and employment growth later.

Employers pushed U.S. job openings in September to the second-highest level since the government started gathering data on the subject in 2000. The Bureau of Labor Statistics reported that the number of advertised openings reached 5.5 million, a smidgen behind the record in July. Employer demand should help address a slack in the labor force that economists blame for holding back wage increases. The report also suggested workers were not gaining confidence in their chances for leaving for a better job, with the so-called quit rate staying unchanged for the sixth month in a row.

The moving four-week average for initial unemployment claims rose for the second week in a row after dropping to the lowest level in nearly 42 years. Jobless applications filed with the Labor Department have remained below the 48-year average every week since the beginning of 2013, a sign that employers generally don’t want to let workers go.

In yet another sign of global economic slowing, prices at the wholesale level took another dip in October. The Bureau of Labor Statistics said the Producer Price Index declined 0.4% from September and 1.6% from the year before, the 10th consecutive month at or below zero. Even excluding volatile food and energy prices, wholesale inflation was up just 0.1% in the last 12 months, far below the Federal Reserve target of 2% as a sign of sustainable economic growth.

Similar to the wholesaler report on Tuesday, business inventories also continued to outpace sales, suggesting businesses are overestimating demand for their goods. To the degree businesses want to run lean, the inventories-to-sales ratio indicated the fattest conditions since 2009.

Despite lower prices, Americans appear to be continuing to hold back on shopping. The Commerce Department reported that retail sales rose just 0.1% in October and only 1.7% in the last 12 months. Of 13 categories, seven reported higher sales for the month. For the year, only gas stations and electronics/appliance stores had lower sales. Consumer spending accounts for about two-thirds of U.S. economic growth. The 1.7% year-to-year sales rate is down from the long-term average of 4.4%. 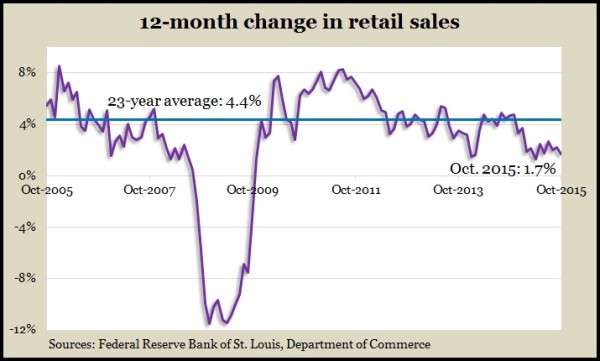 A preliminary read of consumer sentiment from the University of Michigan suggests the highest confidence since July and the most optimistic trends since before the Great Recession. In particular, expectations for six months out have improved in recent surveys. An economist with the survey forecast consumer spending to rise at a modest pace of 2.9% in 2016.