The Bureau of Labor Statistics reported a third-quarter gain in productivity that disappointed analyst forecasts. Still, labor output per work hour grew at an annual rate of 1.9%, the highest measure in a year. Labor costs dipped more than expected in the quarter, suggesting demand for workers remains relatively weak and pressure for inflation is low.

The U.S. trade deficit grew 8% to $41.8 billion in September, the widest gap since May, according to the Bureau of Economic Analysis. A slight decline in exports indicated continued weakness in the global economy, while a 1.2% pickup in imports showed American consumers are spending on such items as cars and phones. A look at the three-month rolling average for imports, which smooths out monthly volatility, shows imports nearing the pre-recession high. 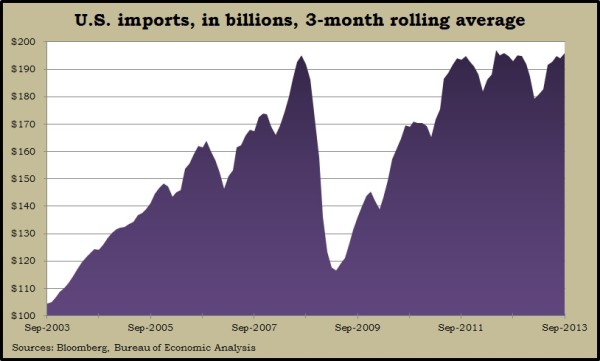 The moving four-week average for initial unemployment claims declined for the second week in a row, settling back from recent statistical anomalies from computer updates in California and the 16-day federal government shutdown. Jobless applications filed with the Labor Department have remained below the 46-year average throughout 2013, a sign that although they’re not hiring at high rates, employers generally don’t want to let workers go, either.

The Commerce Department said wholesalers increased inventories in September, for the third month in a row. But the pace of stockpiling stayed behind the rate of sales, keeping the inventories-to-sales ratio at a relatively lean level. Much of that is due to slowing automotive inventories.

U.S. industrial production and utilization eased off in October, but manufacturing showed continued progress, according to the Federal Reserve. Output overall declined for the first time in three months, but factories expanded production for the third month in a row and were 3.3% ahead of their pace a year ago. Including mining and utilities operations, the percentage of production capacity dipped slightly to 78.1%, well below the long-term average of 80.2%, at which point inflation becomes a concern.