Student loans and car financing continued to increase the amount of outstanding consumer credit carried by American consumers in September. The rate of increase in the debt slowed from August, according to the Federal Reserve. Of particular interest was revolving credit, which represents credit card borrowing. Consumers still are not using credit cards as much as they did before the Great Recession, which can be a sign both of prudence and pessimism. Consumer spending accounts for about 70% of U.S. economic activity. 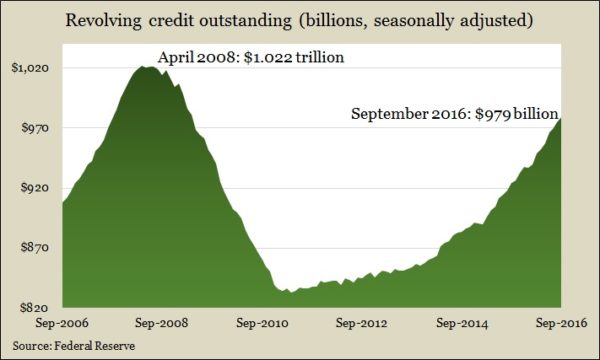 American employers had 5.5 million job openings in September, up three times in the previous four months. Demand for workers remains near all-time highs, according to 16 years of data from the Bureau of Labor Statistics. The number and rate of workers quitting their jobs suggest Americans are confident at finding work, which could support consumer spending.

Wholesalers continued adjusting supply levels to customer demands in September as the inventories-to-sales ratio stayed even with August and about its height just before the recession ended in 2009. The ratio has dropped since January, indicating a more nimble leanness among businesses overall. The Commerce Department said wholesale inventories gained 0.1% from August, vs. a 0.2% rise in sales.

The moving four-week average for initial unemployment claims rose for the fourth week in a row after setting a 43-year record low. Labor Department data showed further evidence of an encouraging employment market in which employers are reluctant to let go of their workers. Claims are 28% below the all-time average, which dates back to 1967.

The University of Michigan said a preliminary survey of consumer sentiment for November suggests a relatively healthy 2.5% increase in consumer spending over the next year. The university’s index showed rising confidence both in current economic conditions and in near-term expectations. Respondents, surveyed before the Nov. 8 election, raised expectations for inflation, perhaps in anticipation of a possible interest rate hike by the Federal Reserve, which meets next month.