American employers had an annual rate of 6.1 million job openings in September, up slightly from August and still near July’s record high. Openings continued to outnumber new hires, according to data from the Bureau of Labor Statistics. Since January 2015, a gap between openings and hires has suggested unmet employment needs. That could lead to higher pay for workers, which should boost consumer spending, which drives about 70% of U.S. economic growth.

One measure of consumer spending is the level of credit card debt, which eclipsed $1 trillion in September, the first time it had been that high since the Great Recession. Total consumer debt outstanding grew 6.6% to an annual rate of $3.8 trillion, the Federal Reserve reported. Much of the growth came from car financing and student loans. Credit card debt rose 7.7% on an annual basis. 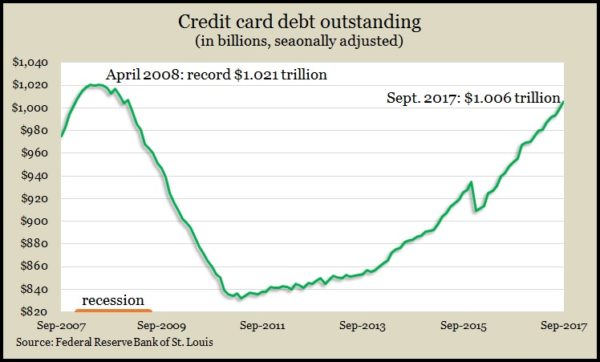 The moving four-week average for initial unemployment claims fell for the sixth week in a row, dropping to the lowest level since March 1973. The six-week drop amounted to a 17.7% decrease following a 16% run-up in the aftermath of the Gulf Coast hurricanes. The jobless claims levels reached 35% below the 50-year average, according to Labor Department data, showing the persistent strength of the employment market.

In a sign that companies continue to try aligning supplies closer to demand, wholesale inventories rose 0.3% in September, vs. a 1.3% gain in sales. Year-to-year, inventories rose 4.6% while sales increased 8.5%. The Commerce Department reported that the inventories-to-sales ratio declined to the lowest level since December 2014. The ratio, which indicates how leanly businesses are operating, is about where it was at the end of the recession.

A harbinger of consumer spending – consumer sentiment – declined slightly since the end of October, according to preliminary data from the University of Michigan surveys. The longstanding sentiment index remained at the second-highest mark for the year and has been hovering at a fairly optimistic level. An economist with the survey said consumers are indicating a spending increase in 2018 of about 2.7%, which is above average for the last 17 years.