The S&P CoreLogic Case-Shiller home price index suggested an August pause in its slowdown. The composite index for 20 U.S. cities registered a year-to-year price gain of 2%, the same as July, after having declined each month since March 2018, when the growth rate was 6.7%. Even with the falling growth rates, the fact that prices continue to rise indicates ongoing demand for housing. 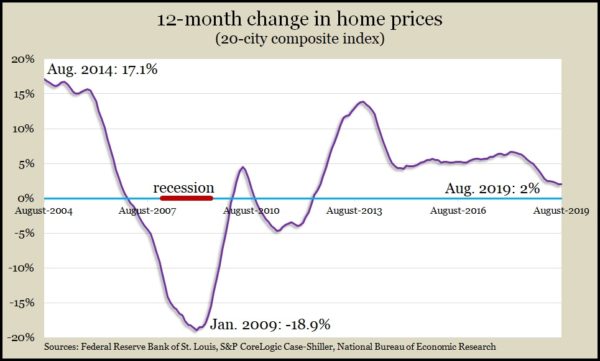 Another housing measure showed more positive signs in September. The National Association of Realtors’ pending home sales index gained 1.5% after a 1.6% increase in August. The trade group said contract signings for houses and condos grew 3.9% from September 2018 amid lower mortgage rates but noted that low inventory continued to push up prices.

A harbinger of personal spending, consumer confidence declined in October for the second month in a row, according to the Conference Board. The business research group said its index remained relatively high and showed no signs that consumers are planning to cut back on year-end holiday shopping.

The U.S. gross domestic product grew at a 1.9% annual rate in the third quarter, faster than analysts expected but down from 2% in the second quarter. It marked the slowest third quarter since 2015, according to data from the Bureau of Economic Analysis. Consumer spending, which drives nearly 70% of economic growth, boosted the GDP, as well as government spending and even the housing industry, which had been a drag on GDP for the seven previous quarters. Business investments declined for the second quarter in a row, and the Federal Reserve’s favorite gauge of inflation rose to 2.2% from 1.9% in the second quarter.

As expected, the Fed’s policy-setting Federal Open Market Committee approved another quarter-point increase to short-term interest rates after its regularly scheduled meeting in Washington. Although it terms the labor market as strong and economic activity as rising moderately, the Fed said inflation has continued to lag below the target rate of 2%.

Consumer spending rose 0.2% in September, the seventh consecutive gain and a notch shy of the 0.3% increase in August. The Bureau of Economic Analysis reported that spending lagged income, which raised the personal saving rate to 8.3% of disposable income, the highest since March. The Federal Reserve’s preferred measure of inflation gained 1.7% from the year before, down from 1.8% in August, suggesting economic growth still weaker than the central bank would like.

The four-week moving average for initial unemployment claims sank for the second week in a row, still hovering around the lowest levels in 50 years. Labor Department data show average claims were down 39% from the 52-year average, a consistent indication of the high demand for workers and employer reluctance to let staff leave.

Employers added 128,000 jobs in October extending the nation’s hiring record to 109 consecutive monthly gains. That’s more than twice the previous record. The pace fell short of the average for the year—167,000, as well as the monthly average of 223,000 for all of 2018. The Bureau of Labor Statistics also said the unemployment rate rose to 3.6%, up from a 50-year low of 3.5% in September. Average hourly wages rose 3% from the year before, the same as in September.

Manufacturing contracted in October for the third month in a row but showed strengthening from September, according to the Institute for Supply Management. Purchase managers surveyed for the industry group’s index cited global trade tensions as their greatest concern. The ISM said the index suggests U.S. GDP growth of 1.6% a year.

The Commerce Department reported a slight pick-up in the annual rate of construction expenditures in September. The $1.29 trillion spending rate was up 0.6% from August but 2% behind the pace of September 2018. Residential spending was up 0.5% for the month and down 3.5% from the year before. Overall, construction spending has remained historically high. It peaked at $1.33 trillion in February 2018.