Non-manufacturing industries, which directly account for about 90% of the U.S. economy, expanded for the 57th month in a row in April, according to the Institute for Supply Management. The pace of non-manufacturing has picked up three months in a row and reached its highest level since August, another sign the economy is emerging from its winter slowdown.

The U.S. trade deficit shrank 3.6% in March, which was less than analysts had forecast. A smaller oil gap contributed. Exports rose 2.1%, nearly reaching the record level set in November. That suggests stronger demand from global markets. Imports, an indicator of domestic consumption, hit their highest mark in two years. 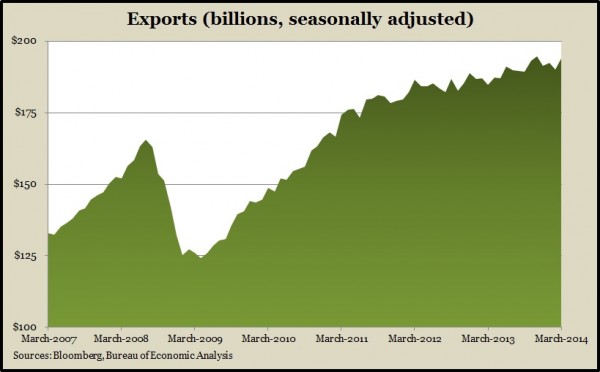 The annual pace of worker productivity fell in the first quarter for the first time in a year. The Bureau of Labor Statistics reported a meager 0.3% gain in output and a 2% decline in hours worked. Analysts say a drop in productivity sometimes signals that current employees are stretched and employers need to hire more, but some of the setback in the first quarter could be a short-term consequence of severe winter weather.

The Federal Reserve reported that consumer credit grew by $17.5 billion in March, which was more than analysts had expected. The debt expansion continues to be concentrated in non-revolving debt such as car financing and student loans. Credit card debt, which is a sign of consumer confidence, rose for the third time in three months.

The moving four-week average for initial unemployment claims rose for the third week in a row to its highest point since mid-March. But the trend may be muddied by one-time fluctuations resulting from Easter business closings. Labor Department data showed jobless claims remaining below the historical average, which is a positive indicator for employment markets, though hiring remains constrained.