A report on March factory orders gave an early indication of the fallout on manufacturing demand. Orders declined a record 10.3%, according to the Commerce Department, dropping to the lowest seasonally adjusted level since October 2017. The collapse in orders came as the coronavirus that causes COVID-19 first became a pandemic. Declines were widespread and were led by commercial aircraft orders, reflecting severe cutbacks in travel.

The U.S. trade deficit deepened in March, widening 11.6% to $44.4 billion. Both imports and exports shrank as a result of the pandemic, which has disrupted global demand as well as supply chains. Exports fell a record 9.6%, led by travel and tourism, industrial supplies and automotive merchandise. In releasing the report, the Bureau of Economic Analysis said the latest data could not reflect the full economic impact of the coronavirus.

The non-manufacturing sector of the U.S. economy, representing about 90% of national employment, contracted in April for the first time in 11 years. The Institute for Supply Management said its non-manufacturing index declined to the lowest level since March 2009, while the business activity component was the lowest in 23 years of data. The trade group cited concerns by purchasing managers about a host of effects from the pandemic, including uncertainty over when normalcy will return.

The four-week moving average for initial unemployment claims declined slightly for the second week in a row but still reflected a historic filing of more than 33 million new claims in the preceding seven weeks. Some economists say the Labor Department figures don’t capture the full extent of job losses from COVID-19 shutdowns because many workers can’t or haven’t yet filed for benefits.

The Bureau of Labor Statistics said worker productivity declined at an annual rate of 2.5% in the first quarter. The biggest productivity slide since the end of 2015 resulted from a 6.2%  drop in the pace of output and a 3.8% fall in hours worked. Both figures were the worst since 2009, and the BLS noted that the bulk of pandemic-related shutdowns and layoffs didn’t start until the tail end of the quarter.

The Federal Reserve reported a 3.4% annual rate of falling consumer debt outstanding in March, including a 30.9% drop in credit card debt. That marked the first decrease in so-called revolving credit since August 2011 and the largest since January 1989. With nearly 70% of U.S. economic growth relying on consumer spending, the plunge in credit card debt signals a dramatic drop-off amid disruptions from the pandemic. 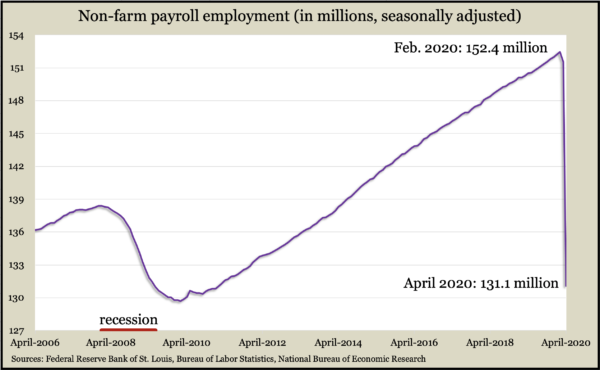 The impact of the pandemic on workers showed in historic payroll and unemployment figures for April. Employers cut a record net 20.5 million jobs in the month, the most in 72 years of official data, about double all the jobs lost in the Great Recession. The Bureau of Labor Statistics said the number of jobs was at its lowest level since February 2011, meaning so far repercussions from COVID-19 had wiped out nine years of job gains. Also, the unemployment rate rose to 14.7%, the highest in data going back to 1948. In February, the jobless rate was 3.5%, the lowest in 50 years. The government itself acknowledged that the rate underestimated the extent to which Americans lost jobs, suggesting the rate could have been closer to 20%.