Consumer spending, which accounts for about 70% of U.S. economic activity, rose 0.4% in March, following no change in February. The Bureau of Economic Analysis reported that spending outpaced income, which lowered the personal saving rate to 3.1% of disposable income from 3.3% in February, both well below the 8.3% average since 1959. Also in the report, the Federal Reserve’s preferred measure of inflation showed a year-to-year gain of 1.9%, the highest mark since January 2017. The central bank’s target of 2% has not been crossed since April 2012. 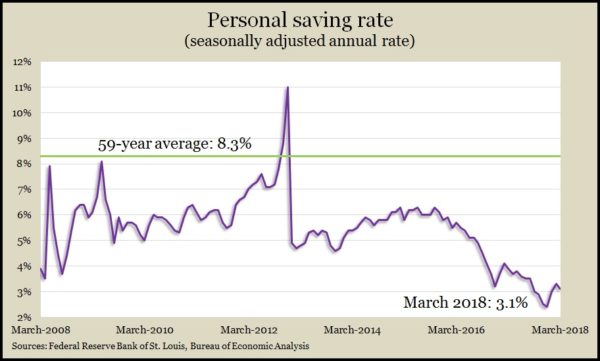 Relatively low inventory continued to constrain housing sales in March, according to a pending home sales index from the National Association of Realtors. The index rose 0.4% from February, much lower than analysts expected. The index was down 3% from March 2017, the third consecutive year-to-year decline. The trade association has been blaming a lack of houses for sale for raising prices beyond affordability for many buyers as moderately growing economic conditions fuels demand.

The Commerce Department provided more evidence of the choppy housing recovery, with residential construction expenditures slowing for March but rising 5.3% from the same time last year. Single-family housing construction spending rose 9.7% in the last year, possibly helping address concerns about low inventory. Overall construction spending slowed 1.7% in March to an annual rate of $1.28 trillion, but February’s rate was the highest in 25 years of data.

Manufacturing growth slowed in April for the second month in a row but still signaled the 20th consecutive month of industry expansion, according to the Institute for Supply Management. Growth slowed to the lowest level since July as new orders, production, and employment all expanded at a slower pace. Most components of the trade group’s index kept growing but at a slower pace. Some purchasing managers reported business disruptions over uncertainty of pending metal tariffs.

Automotive sales slipped in April while remaining relatively healthy, according to statistics from the trade group Autodata Corp. The annual pace of motor vehicle sales reached 17.2 million cars and trucks, down 1.8% from March but up 0.7% from April 2017. Imported trucks continued to have better sales trends than U.S.-made vehicles.

After two days of regularly scheduled meetings, the Federal Open Market Committee issued a statement affirming its commitment to continue gradually raising short-term interest rates. The policy-making group of the Federal Reserve Board has boosted rates six times so far since December 2015. The committee kept the federal funds rate in the range of 1.5%-1.75% as it seeks to encourage full employment and 2% inflation.

The Bureau of Labor Statistics reported that worker productivity grew at a 0.7% annual rate in the first three months of 2018. The modest gain was based on a 2.8% rise in output and a 2.1% increase in hours. Year-to-year, productivity rose 1.3% on a 3.6% rise in output and a 2.2% rise in hours worked. Labor costs rose at a 2.7% rate in the quarter with a 3.4% rise in hourly compensation. Corrected for inflation, compensation fell at an annual rate of 0.1%, suggesting continued concern both for mild productivity and weak wage growth. The average productivity growth since World War II is about 2% a year.

The moving four-week average for initial unemployment claims fell for the second week in a row, nearing the lowest level since December 1969. Labor Department data show average claims down 38% from the 51-year average in a persistent indication of the tight labor market and employers’ reluctance to let go of their workers.

The U.S. trade deficit narrowed to $49 billion in March, the smallest gap in six months. The Bureau of Economic Analysis reported that the trade gap was down 15.2% from February with exports rising 2% to a new record, while imports declined 1.8%, the largest drop in two years. Compared to March 2017, the deficit widened 18% with exports growing 6.8% and imports rising 9.1%.

Non-manufacturing expanded for the 99th consecutive month in April, although slowing in pace for the third consecutive month, according to the ISM Non-Manufacturing Index. All 18 of the industries surveyed reported growth. Overall, new orders and export orders both grew at a faster pace. Based on the index, the Institute for Supply Management said the economy is growing at a 2.9% annual rate.

The Commerce Department said factory orders rose 1.6% in March, advancing for the seventh time in eight months. Excluding the volatile transportation industry, orders rose 7.7% from March 2017. Plans for non-defense capital goods excluding aircraft, a proxy for business investments, declined for the third time in four months and remained below where they were just before the recession, suggesting wavering investments in productivity.

Friday
Employers added 164,000 jobs in April extending the nation’s hiring record to 92 consecutive monthly gain. The pace of job growth continued to slow, falling below a 12-month average of 191,000 new jobs. The Bureau of Labor Statistics also said the unemployment rate dropped to 3.9%, the lowest since December 2000. Average hourly wages rose 2.6% from the year before, lower than analysts expected and a sign that the healthy employment market still hasn’t boosted pay as much as some economists would like as a way of encouraging more consumer spending.