The driver of 70% of U.S. economic activity, consumer spending rose a little less than expected in March but followed a strong February and remained at a reasonable pace. The Bureau of Economic Analysis said personal income rose more than analysts had forecast. The same report showed a key inflation measure – the core Personal Consumption Expenditure index, rising at a 2% annual rate for the fourth month in a row. That’s about where monetary policy officials at the Federal Reserve have said they’d like inflation to be at this point. 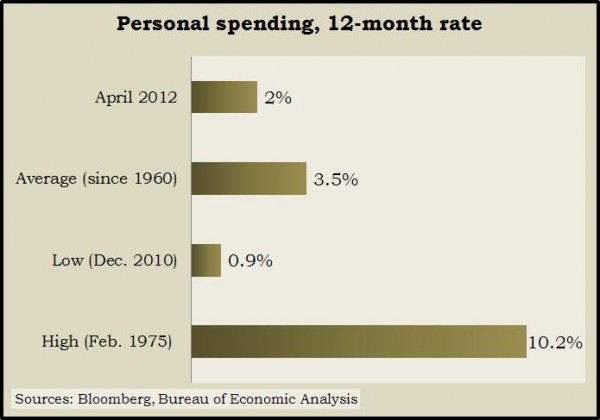 Manufacturing appeared to pep up in April after slowing its advance in recent months, according to the Institute for Supply Management. The trade group’s index, based on surveys of purchasing managers, hit its highest level in 10 months, much better than experts had expected.

Also beating expectations, motor vehicle sales rose slightly in April, at an annual rate of 14.4 million vehicles. Figures from Autodata Corp. show that next to February, vehicles sales climbed to their highest point in four years.

Echoing some other reports suggesting a recent slowdown in manufacturing demand, the Commerce Department said factory orders declined in March for the second time in three months. The monthly report is considered a volatile economic indicator but showed broad declines beyond a drop in commercial airline orders. The ISM Manufacturing Index for April offers hope, however, that orders since have improved.

Labor market conditions are still sorting out, according to the moving four-week average for initial unemployment claims, which rose for the fourth week in a row. Labor Department data showed jobless claims at their highest level since December while still 42% lower than the bleakest point of the recession. Claims have been below the critical level of 400,000 for 27 weeks in a row.

The ISM non-manufacturing index disappointed analysts by dropping more than expected in March, the second decline in as many months. But it still suggested continued expansion for the 28th month in a row with none of the categories in the index showing contraction.

The April employment report showed fewer jobs created than expected with barely a budge in hours worked or wages earned. Employers added 115,000 jobs in April, less than half the three-month average, raising questions about the sustainability of America’s modest pace of economic growth. The unemployment rate dipped to 8.1%, the lowest since January 2009, but much of that reflected Americans dropping out of the job market. Positive signs included statistical revisions showing 53,000 more jobs than previously estimated in February and March, as well as a rebound in temporary hires, which tends to portend increases in permanent positions. 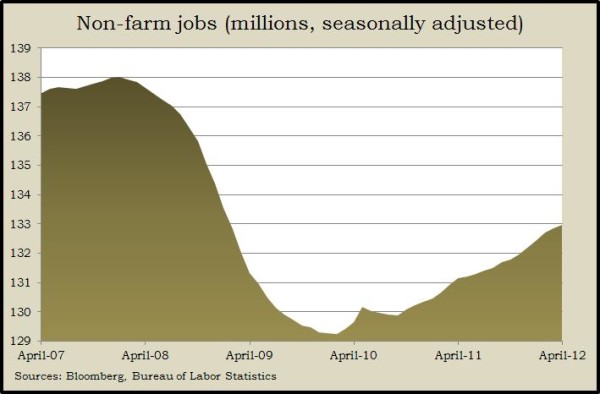