Evidence of the months-long slowdown in housing markets showed up in further reductions in home-price gains in March. The S&P CoreLogic Case-Shiller home price index rose 2.7% year-to-year for the 20-city composite index, down from 3% in February and down from 6.7% a year ago. A housing economist for Standard & Poor’s said the industry should be doing better given falling mortgage interest rates and the relative strength of the economy, including low joblessness, reasonable household debt and strong consumer sentiment. Even with home price increases moderating, though they still are outpacing inflation overall. 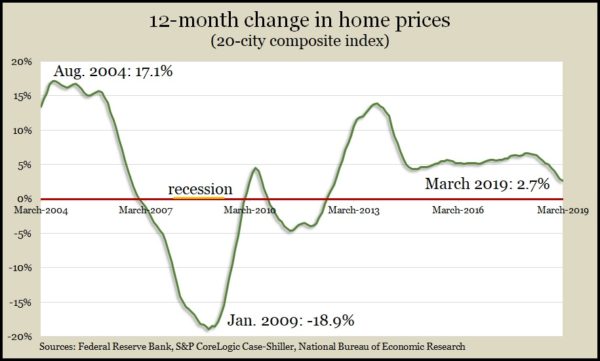 The U.S. economy grew at a 3.1% annual rate in the first quarter, the fastest pace to start a year since 2015. That was slightly below an initial estimate of 3.2% but up from the 2.2% rate in the fourth quarter. The Bureau of Economic Analysis said the slower pace in gross domestic product came from downgraded estimates for inventory buildup, business spending and residential investment, which has been negative for five quarter in a row. Consumer spending rose at a 1.3% annual rate, up from 1.2% in the initial estimate. The Federal Reserve’s favorite measure of inflation rose at a 1.6% annual rate, the lowest since the end of 2017.

Pending contracts for existing house sales dropped 1.5% in April after a 3.9% gain in March. The measure declined 2% from April 2018 for the 16th straight year-to-year setback, according to the National Association of Realtors. An economist for the trade association said lower mortgage rates and higher consumer confidence would make increased sales “inevitable.” The report showed low inventories of houses for sale for less than $250,000.

The four-week moving average for initial unemployment claims fell for the second week in a row to remain near the lowest levels since 1969. New jobless applications were 39% lower than the 52-year average, according to Labor Department data, indicating an extended reluctance by employers to let go of their workers. Economists say the tight labor market has been fueling the confidence that should lead to further consumer spending.

Consumer spending rose 0.3% in April, down from an upwardly revised increase of 1.1% in March, according to the Bureau of Economic Analysis. Spending slightly outpace income, which nudged the personal saving rate up to 6.2% of disposable income. The latest monthly measure of the Fed’s preferred inflation gauge was 1.6%, marking the first increase in four months. In the last seven years, inflation rose above the Fed’s target of 2% only once—last July.

The University of Michigan reported higher consumer sentiment retreated in the last couple of weeks in May but still ended the month higher than in April. The index reading was the highest since September and showed consumers with higher expectations and a slightly dimmer view of current conditions. A university economist consumers surveyed mentioned more concerns about tariffs, which they expect will raise inflation and lower their real income.