Housing prices kept climbing in March. The S&P/Case Shiller Home Price Index reached its widest year-to-year increase since April 2006 at nearly 11% for the 20-city composite. It marked the 15th month in a row of improving 12-month comparisons, and each city had gains for the third consecutive month. An economist for Standard & Poor’s cited data on continued foreclosures and other factors as signs that “the housing recovery is not complete.”

Consumer confidence rose more than expected in May, the second monthly increase and the highest level in more than five years, according to the Conference Board. Consumer attitudes improved toward current conditions and especially future outlook. Even so, consumers expecting fewer jobs in the next six months outnumbered those expecting more jobs.

At 2.4%, first-quarter economic growth was a bit slower than earlier estimated, but it still beat the 0.4% annual pace in the last three months of 2012. The Bureau of Economic Analysis said the Gross Domestic Product expanded for the fifth consecutive quarter after eclipsing its pre-recession peak. Personal consumption, which drives more than 70% of economic activity, advanced at a higher-than-expected 3.4%, which matches the long-term average. GDP growth is still trailing the long-term rate of 3.2%. 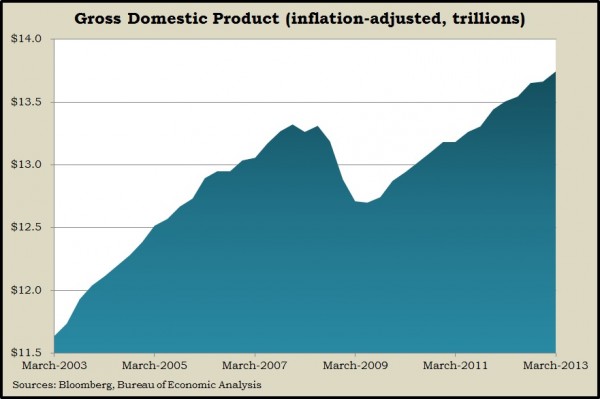 The moving four-week average for initial unemployment claims rose for the third week in a row, though it remains below the historic average and is hovering near five-year lows. The Labor Department indicator continues to suggest that employers overall are reluctant to let workers go.

Personal income stayed flat in April, which resulted in a pullback in personal spending, the Bureau of Economic Analysis said. Adjusted for inflation, consumer purchases rose 0.1%, the smallest gain in six months. The saving rate stayed at a relatively low 2.5% of disposable income. Speaking of inflation, the core Personal Consumption Expenditure index – a key gauge followed by the Federal Reserve – rose less than 1.1% from April 2012, the lowest rate in data going back to 1960. That would suggest the economy is still too weak for the Fed to reconsider its monetary stimulus efforts.

Another measure of consumer sentiment showed Americans more optimistic about their finances than at any time since July 2007. The monthly report – from the University of Michigan and Thomson Reuters – said consumers feel better about current conditions as well as prospects six months down the road. Economists connect increased confidence with more consumer spending.