The recovery in housing prices slowed for the fourth month in a row in March. The S&P/Case Shiller Home Price Index showed the year-to-year increase in prices for the 20-city composite narrowed to 12.4% from nearly 14% in November. The indicator is among a rash of mixed signals suggesting that although the housing comeback has tamed down from its pace a year ago, the sector continues to gain ground. The price index has returned to where it was in 2008, representing price levels first reached in 2004. 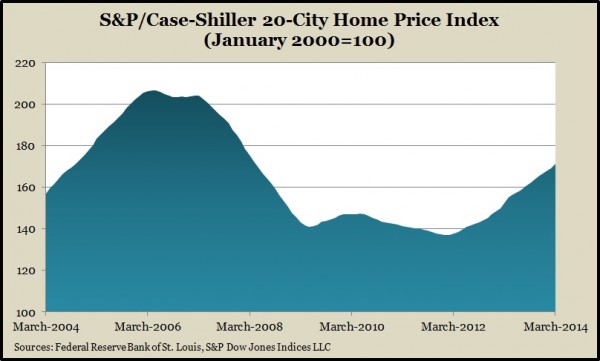 Consumer confidence rose in May, reaching its second-highest point since the end of the recession. According to the Conference Board, consumers felt better both about current conditions and the near future. Expectations for pay raises in the next six months grew to the highest level since before the recession, in December 2007.

A measure of manufacturing prospects, durable goods orders, increased in March for the third month in a row, the Commerce Department said. Even excluding orders for transportation equipment – a heavy, but volatile factor – bids for manufacturing rose. A key measure of business investments, however, dipped for the first time in three months.

The economy shrank at an annual rate of 1% in the first quarter, reversing the direction from a 2.6% gain in the fourth quarter, the Bureau of Economic Analysis said. The decline in Gross Domestic Product reflected a diminished rate of inventory buildup and a downturn in both business investments and exports. Consumer spending – which drives about two-thirds of business activity – increased at an annual rate of 3.1%, slightly higher than previously estimated and on par with the 30-year average.

The moving four-week average for initial unemployment claims sank for the third week in a row. According to Labor Department data, the level of jobless claims was the lowest since a seven-year low in January and marked 17 consecutive months of filings below the long-time average. Meager claim levels suggest employers are reluctant to let workers go.

Citing increased inventory and lower mortgage rates, the National Association of Realtors reported that pending house sales rose in April for the third month in a row. The April gain was 0.4%, down from 3.4% in March, and less than analysts expected. On a year-to-year basis, pending sales fell for the seventh month in a row.

Personal spending dipped in April after a surge in March, the Bureau of Economic Analysis said. The spending decline accompanied weaker growth in personal income in April, though the difference still raised the saving rate to 4% of disposable income, vs. 3.6% in March. On a 12-month basis, spending grew by 4.3%, the most since April 2012. The core Personal Consumption Expenditure index – a key inflation measure – rose 1.4% since April 2014, the highest in 14 months, but still short of the Fed’s 2% target.