Consumer spending, which accounts for about 70% of U.S. economic activity, perked up by 0.9% in March. The Bureau of Economic Analysis reported that spending outpaced income, which rose 0.1%, although wage gains were stronger. Also in the report, the Federal Reserve’s preferred measure of inflation showed a year-to-year gain of 1.6%, the lowest since September 2016 and below the central bank’s target of 2%.

A year-long slowdown in housing hit sales prices in February, according to the S&P CoreLogic Case-Shiller index. Home prices in the 20-city composite index grew 3% from February 2018. That’s down from 3.5% growth in January and the lowest increase since August 2012. Still, home prices continued to outpace broader inflation.

The National Association of Realtors said its pending home sales index rebounded in March, up 3.8% from February, which was better than analysts expected. Year-to-year, though, the index fell 1.2%, the 15th consecutive decline. An economist for the trade association expressed optimism for the real estate market, citing favorable mortgage rates and a pent-up demand based on population growth.

Consumer confidence rebounded in March, with attitudes improving toward both current conditions and the near future, according to the Conference Board. The business research group said its monthly index suggested consumers expect solid economic growth into the summer, which should support more consumer spending.

The Commerce Department provided more evidence of the choppy housing recovery, with single-family residential building leading a decline in construction expenditures for March. The annual pace of construction spending overall fell 0.9% from February and was down 0.8% from March 2018. Public spending increased from the year before on streets, schools and sewers, but total construction spending has drifted lower since hitting a record high of $1.32 trillion last May.

Manufacturing growth slowed in April to the lowest level since October 2016 but still signaled the 32nd consecutive month of expansion for the sector, according to the Institute for Supply Management. Growth slowed for new orders, production and employment, with purchasing managers from 15 of 18 industries telling the trade group that their businesses continued to expand.

After two days of regularly scheduled meetings, the Federal Open Market Committee issued a statement affirming its patience as it has paused gradually raising short-term interest rates. The policy-making group of the Federal Reserve Board had boosted rates eight times since December 2015. The committee kept the federal funds rate in the range of 2.25%-2.5% as it seeks to encourage full employment and 2% inflation long term.

Automotive sales slipped in April to the lowest level since December 2016, according to statistics from the Bureau of Economic Analysis. The annual pace of motor vehicles sold reached 16.4 million cars and light trucks, down 5.8% from March and down 4.5% from April 2018. Since March, only imported cars experienced higher sales. Year-to-year, only U.S.-made trucks sold more.

The Bureau of Labor Statistics reported that worker productivity grew at a 3.6% annual rate in the first three months of 2019. The strong gain was based on a 4.1% rise in output and only a 0.5% increase in hours worked. Year-to-year, productivity rose 2.7%, the highest since the third quarter of 2010. Labor costs fell at a 0.9% annual rate in the quarter and rose 0.1% over the most recent four quarters, the lowest since the last quarter of 2013.

The four-week moving average for initial unemployment claims rose for the second week in a row after falling to the lowest level since November 1969. Labor Department data show average claims down 40% from the 52-year average in a persistent indication of the tight labor market and employers’ reluctance to let go of their workers.

The Commerce Department said factory orders rose 1.9% in March, advancing for the first time in three months. Excluding the volatile transportation industry, orders rose 0.8% from February and were up 1.2% from March 2018. Orders for non-defense capital goods excluding aircraft, a proxy for business investments, rose for the third month in a row and were up 1.4% from March 2018.

Employers added 263,000 jobs in April, extending the nation’s hiring record to 103 consecutive monthly gains. The pace of job growth exceeded the 12-month average of 213,000 new jobs. The Bureau of Labor Statistics also said the unemployment rate dropped to 3.6%, the lowest since December 1969. Average hourly wages rose 3.2% from the year before, which made eight months in a row above 3%. That hadn’t happened for a decade. 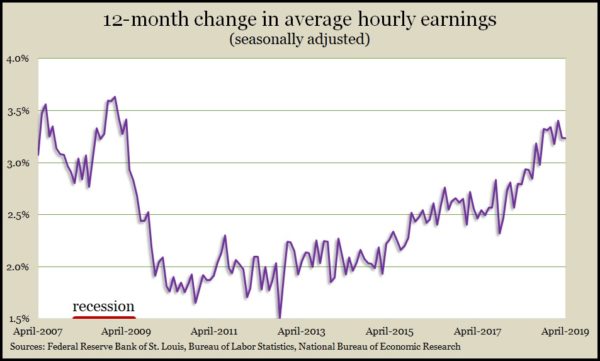 Non-manufacturing expanded for the 111th consecutive month in April, although slowing in pace for the second month in a row, according to the ISM Non-Manufacturing Index. Purchase managers surveyed for the index said they remain mostly optimistic about business conditions but are concerned about employment resources. Based on the index, the Institute for Supply Management said the economy is growing at a 2.4% annual rate.