The driver of 70% of U.S. economic activity, consumer spending rose a little more than expected in March but followed a strong February and remained at a reasonable pace. The Bureau of Economic Analysis said personal income rose more than analysts had forecast. The same report showed a key inflation measure – the core Personal Consumption Expenditure index, rising at a 1.1% annual rate. That’s the lowest rate in two years and well below the level at which monetary policy makers at the Federal Reserve have said they would worry about inflation.

Contracts for home sales increased more than expected in March and advanced 7% from the year before, according to the National Association of Realtors. March marked the 23rd consecutive month in year-to-year gains for pending home sales, but the trade group said a limited supply of houses for sale could slow activity.

Another sign of the U.S. housing recovery has been the gradual increase in sales prices for houses. The S&P/Case-Shiller index showed the 14th month in a row of improving year-to-year price increases in February. The 9.3% gain for the 20-city composite was the widest gap since May 2006. 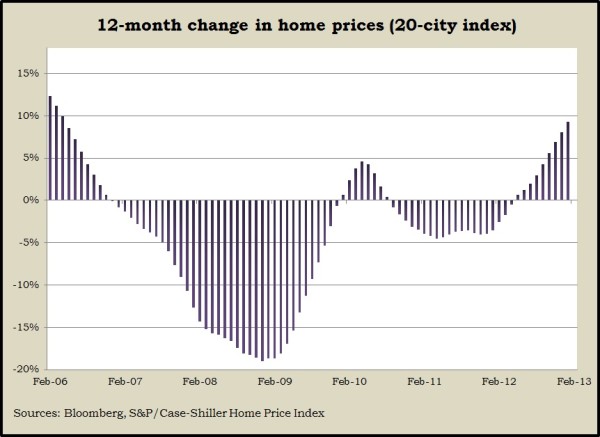 A leading indicator of consumer spending, consumer confidence, gained more than expected in April, mostly from greater expectations for employment and income later in the year. The Conference Board said consumers’ assessment of current conditions changed from March. Noting recent mood swings among consumers, an economist for the business research group said, “It is too soon to tell if confidence is on the mend.”

The Commerce Department said construction spending fell in March, disappointing analyst expectations. Both private and public spending on construction declined, although the government side dropped the most in 11 years. Total spending on housing construction continued growing, though, escalating nearly 18% from March 2012.

The ISM Manufacturing Index suggested the industry continued expanding for the fifth month in a row in April but just barely. Factories kept hiring, though at a slower pace. New orders and production components grew even faster than in March, offering potential for coming months.

The annual rate of motor vehicle sales dipped for the second month in a row in April. But figures from Autodata Corp. show a 5.7% increase in rate from the same time last year, and many analysts still consider automotive production and sales as continuing bright spots for the economic expansion that began nearly four years ago.

Employers remained reluctant to let workers go, according to the moving four-week average for initial unemployment claims, which fell for the second week in a row and dropped near the lowest level of the recovery. Labor Department data showed jobless claims about where they were five years ago, before the financial markets collapse.

Possibly reflecting a slowing in economic growth abroad as well as more cautious spending at home, America’s trade deficit shrank by 11% in March to $38.8 billion. U.S. exports declined 0.9% for the month, the Bureau of Economic Analysis reported. Imports to American consumers and businesses dropped by 2.8%, the most in three years. For the month, the U.S. trade deficit with China fell by 23.5%.

The April employment report showed more jobs created than expected along even greater employment in February and March than was initially estimated. The Bureau of Labor Statistics said employers added 165,000 jobs in April, less than the 12-month average and still a modest pace to recover the 2.6 million jobs still missing since the recession began. The private sector climbed back to the highest payroll level since September 2008 while public employment dropped to its lowest in more than seven years.

The ISM non-manufacturing index disappointed analysts by slowing more than expected in April. The Institute for Supply Management report still suggested continued expansion for the 40th month in a row for non-manufacturing businesses.

Echoing some other reports suggesting a slowdown in manufacturing demand, the Commerce Department said factory orders declined in March. The monthly report is considered a volatile economic indicator but showed broad declines beyond a drop in commercial airline orders.