Housing prices continued a gradual climb in March just as the COVID-19 pandemic hit. Year-to-year comparisons from the S&P CoreLogic Case-Shiller index showed a 3.9% March increase for the 20-city composite index, which has accelerated every month since August, when the growth rate was 2%. An economist for the index said the impact of the pandemic on house prices should be more noticeable in April’s data.

With some businesses beginning to reopen in May, consumer confidence picked up, according to the Conference Board. The business and research group’s survey-based index showed overall outlook improving from April, although consumers’ assessments of current conditions continued to erode, plunging nearly 100 points since the pandemic. A Conference Board economist said concerns remain about financial prospects and inflation, and “the uneven path to recovery and potential second wave are likely to keep a cloud of uncertainty hanging over consumers’ heads.”

The Commerce Department reported that new-home sales picked up slightly in April although the volatile indicator was down 19.5% from its 12-year peak in January. Fewer houses at the upper end of prices sold in April, resulting in a 3.6% drop in the median sale price, compared to April 2019. The number of new houses on the market stayed above the level just after the Great Recession but was still 43% below pre-recession highs.

The four-week moving average for initial unemployment claims declined slightly for the fifth week in a row but remained historically high. More than 40 million Americans filed new claims for benefits since March 21, according to Labor Department data, representing more than one-fourth of the 156 million people in the labor force. Economists suggest figures are undercounting job loss, considering displaced workers who have not succeeded at filing claims amid overwhelmed state systems.

The U.S. economy sank even more than initially estimated in the first quarter, with gross domestic product contracting 5%, The Bureau of Economic Analysis reported. The preliminary estimate was a 4.8% decline. Consumer spending, which drives about 70% of economic activity, declined at an annual rate of 6.8% in the first three months of the year while business investments fell at a 7.9% rate. The government acknowledged that the data couldn’t fully quantify the impact of the COVID-19 pandemic, which had been declared only in the latter weeks of the quarter.

The Commerce Department said durable goods orders dropped 17.6% in April following a 16.6% decline in March. Unadjusted for inflation, it was the lowest level of spending on long-lasting manufactured items since the end of 2009. Declines were widespread, led by commercial aircraft and automobiles. From April 2019, orders fell 11.4%. Excluding the volatile transportation category, year-to-year orders sank 2.3%.

Pending home sales also fell in April, also for the second month in a row. The National Association of Realtors said its index of pending purchases receded 21.8% from March, the most in 19 years of data. Contracts were down 33.8% from April 2019. The trade association said it expects home sales to bottom out in May before rising again based on affordability of housing, including low mortgage rates.

April, the first full calendar month of the pandemic, saw an unprecedented 13.6% drop in consumer spending. Data from the Bureau of Economic Analysis showed the seasonally adjusted annual rate of spending plunging by $2.9 trillion, or nearly 20% since February. The level of spending sank to its lowest point since September 2014. Personal income rose 10.5% in April, mostly because of government payments intended to support consumer spending. Instead, the personal saving rate rose to 33% of disposable income, far and away the highest on record in data going back to 1959. 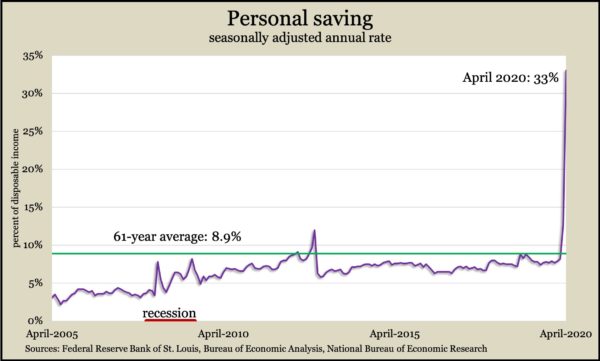 A precursor to spending, consumer sentiment, remained largely unchanged in May after remarkable declines in March and April. The University of Michigan economist who oversees the longstanding report said surveys suggest that despite government efforts to supplement incomes lost during the pandemic shutdowns, consumers have too much uncertainty to spend as freely as before COVID-19.