After its second-fastest clip since the recession, the annual rate of new home sales declined in April, according to a report from the Commerce Department. Data showed an annual sales rate of 569,000 residences in April, up 0.5% from the year before and still above the level just before the 2008 financial collapse. That’s still below the 54-year average of 651,000 houses sold per year. As it has since late 2011, the supply of new houses stayed below the long-term average. 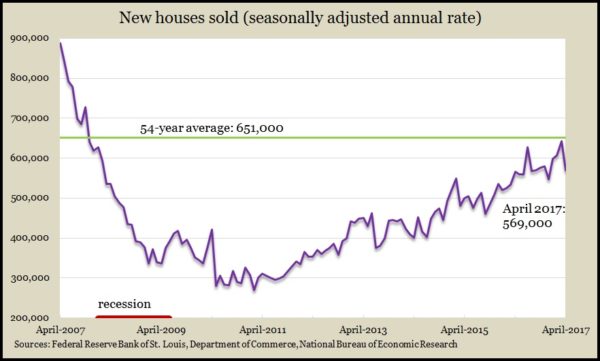 Again citing an ongoing lack of inventory, the National Association of Realtors said existing home sales declined 2.3% in April from a downwardly revised sales pace in March. The trade group repeated concerns that insufficient supply is discouraging would-be buyers and pushing up costs. The median price rose on a year-to-year basis for the 62nd month in a row. Inventory was down 9% from April 2016 for the 23rd straight decline.

The moving four-week average for initial unemployment claims fell for the second week in a row and the sixth time in eight weeks, approaching a 44-year record. According to Labor Department data, the level of jobless applications remained well under the 50-year average, suggesting persistent reluctance by employers to let workers go, which could encourage greater consumer spending.

Economic growth did not slow down as much as initially estimated in the first quarter, according to the first of two updates by the Bureau of Economic Analysis. The gross domestic product rose at an annual rate of 1.2% in the first three months of 2017, up from a preliminary report of a 0.7% gain. That compares with a 2.1% increase in the fourth quarter. Consumer spending, which drives about 70% of GDP growth, rose only 0.6% in the first quarter, though still twice the initial estimate. Increased business investments also helped boost GDP revisions. The Federal Reserve’s favorite measure of inflation rose at a 2.1% annual rate, near the Fed target.

Durable goods orders, a measure of manufacturing prospects, declined in April, the indicator’s first setback in five months. Even excluding orders for transportation equipment – a heavy, but volatile factor – bids for manufacturing fell for April, although they remained 3.8% ahead of their year-ago pace. Within the same Commerce Department report, an indicator of business investments remained unchanged for the second month in a row and rose just 1.3% from April 2016.

Consumer spending should rebound and average about 2.3% this year, based on the May consumer sentiment index from the University of Michigan. Overall optimism has remained relatively high since December, but an economist with the survey notes “an extreme partisan divide” between consumers who expect a recession and those who have high hopes for the economy.