Five months after its highest level since the Great Recession, the annual rate of new home sales declined in April, according to a report from the Commerce Department. An annual sales rate of 662,000 residences in April, dropped 1.5% from the pace in March but was 11.6% ahead of April 2017. The pace is ahead of the 55-year average but only about half of the peak reached in mid-2005. The median sales price was up 0.4% from the year before. Meanwhile, the supply of new houses for sale was 5.4 months, below the long-term average of 6.1 months, furthering concerns about a lack of inventory in the housing market. 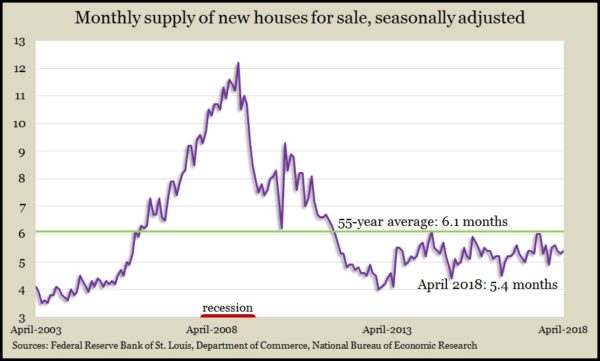 A report from the Labor Department showed the four-week moving average for initial unemployment claims rising for the first time in five weeks after hitting its lowest mark since December 1969. The indicator of employer reluctance to let workers go has been below its 51-year average every week since the beginning of 2013 and is one of the most persistent signals of the tight labor market. Demand for workers should empower more consumer spending, which drives about 70% of the U.S. gross domestic product.

Again citing an ongoing lack of inventory, the National Association of Realtors said existing home sales declined 2.5% in April. The annual pace of home sales dipped to 5.46 million houses, down 1.4% from April 2017, for the second consecutive year-to-year decline. The trade group repeated concerns that insufficient supply is pushing up prices and discouraging potential buyers. The median price rose on a year-to-year basis for the 74th month in a row. Inventory was down 6.3% from April 2017 for the 35th straight decline.

A measure of manufacturing prospects, durable goods orders, declined in April, the first setback in three months. Excluding orders for transportation equipment – a heavy, but volatile factor – bids for manufacturing rose 0.9%, raising the year-to-year gain to 7.9%, according to the Commerce Department. An indicator of business investments rose 1% from March and 6.6% from April 2017. Economists have been keeping an eye on business investments as productivity has lagged.

Consumer sentiment remained relatively high in May, though it declined slightly from April, based on a longstanding index from the University of Michigan. Overall optimism has been elevated since late 2016 as both expectations and sentiment toward current conditions have boosted consumers’ outlooks. Confidence in their jobs and financial prospects help fuel consumer spending.