In another sign of housing’s gradual recovery, the National Association of Realtors reported a rise in existing-home sales in April. The median price for previously owned houses gained 11% from April 2012, the 14th consecutive year-to-year increase. An economist for the trade association said sales would be greater if not for strict lending practices and an insufficient supply of houses for sale. Some economists attribute a “wealth effect” to rising home values, making consumers feel more confident about their financial situations and outlook.

The annual sales rate of new houses also advanced in April, according to the Commerce Department. The increase was more than analysts had expected and improved on a March rate that was higher than previously estimated. The data indicated that the supply of new houses is lagging demand, which is helping to increase the median sales price. 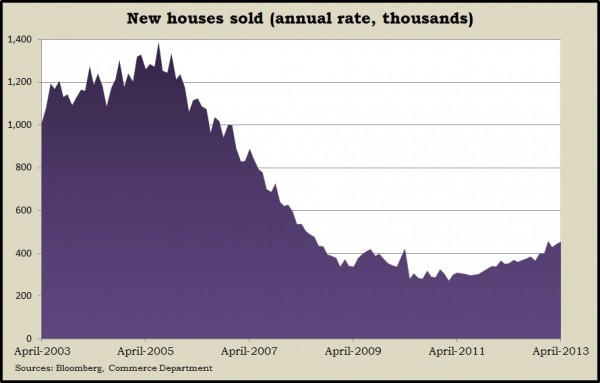 The moving four-week average for initial unemployment claims dropped for the fourth time in five weeks, suggesting continued reluctance among employers to let go of workers. The Labor Department reported jobless claims were near their five-year low and well below the 45-year average.

The Commerce Department reported higher-than-expected durable goods orders for April, after a broad loss in March. Orders of non-military capital goods, excluding aircraft – a gauge of business investment – rose for the second month in a row, which could be an encouraging development amid recent signs of a slowdown in manufacturing.