In another sign of housing’s diminished recovery, the National Association of Realtors reported the first rise in existing-home sales in four months. The trade group said a 6.5% gain in houses for sale and a slowdown in price increases helped push sales up to the highest annual level since December. Following a setback from severe winter weather, sales should continue climbing this year, the association said, but probably not back to the pace of 2013. 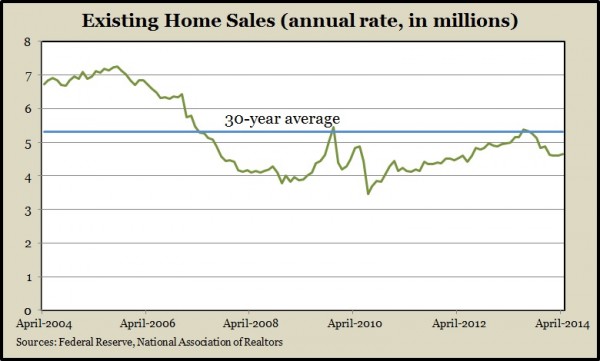 Housing and financial gains contributed to the fourth consecutive increase in the leading economic indicators, according to the Conference Board. The business research group said its April index suggests steady growth of the economy and perhaps even a quickening in the pace of expansion in the second half of the year. It identified consumer spending and business investment as key drivers.

The moving four-week average for initial unemployment claims dropped for the second week in a row, maintaining a level below the 47-year average. The Labor Department report suggested ongoing reluctance among employers to let their workers go.

The annual sales rate of new houses advanced in April, according to the Commerce Department. The increase was more than analysts expected and improved on March and February rates that were higher than previously estimated. The year-to-year median sales price fell for the second time in three months, and the supply of houses grew from April 2013, suggesting improved conditions for further sales.