The COVID-19 pandemic hit the housing industry in April with the annual rate of housing starts falling 30% behind its pace both in March and the year before. According to data from the Commerce Department, it was the largest year-to-year decline since 2009. In January, housing starts reached their highest pace since but have sunk to levels experienced in the Great Recession as well as in recessions in 1991 and 1982. Building permits, an indicator of future housing construction, also slowed to a recession-level rate. 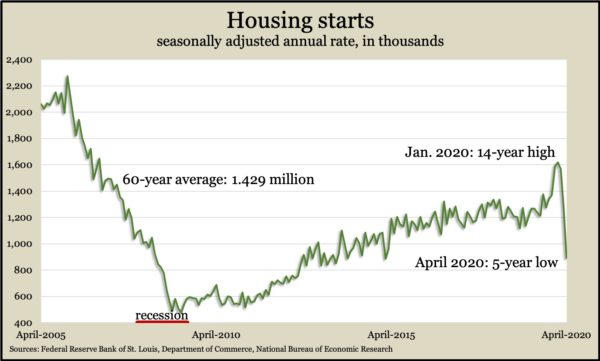 The four-week moving average for initial unemployment claims declined slightly for the fourth week in a row but remained nearly 10 times the average level since 1967. More than 38 million Americans have filed claims for benefits since March 21, according to Labor Department data. An additional 2.2 million who otherwise do not qualify for unemployment insurance filed for Pandemic Unemployment Assistance in the week ended May 16.

Another sign of the pandemic’s toll on housing showed in a 17.8% drop in existing home sales in April, the biggest dip and to the lowest level since 2010, according to the National Association of Realtors. The annual rate of sales declined for the second month in a row and was down 17.2% from April 2019. An economist for the trade group called the setback temporary but said even low mortgage rates won’t help without increased construction and more listings. The supply of houses for sale was down nearly 20% from the year before.

The Conference Board said its index of leading economic indicators fell 4.4% in April, following a 7.4% decline in March that was the worst in 60 years of data. Among the indicators, only stock prices and interest rate spread offered positive results for April. The business and research group said the U.S. already is in recession territory and that declines were so widespread that even if some sectors start reopening, the broader economy would not have a quick recovery.