Business inventories were unchanged in March, while sales rose 0.5%, according to a separate Commerce Department report. As a result, the inventories-to-sales ratio declined, suggesting businesses are trying to more closely align supply with demand. Year-to-year, inventories rose 3.8% while sales rose 6.4%.

The Federal Reserve reported that industrial production rose in April for the third month in a row. Output increased 0.7% from March and 3.5% from April 2017. Manufacturing production gained 0.5% for the month, led by business equipment, suggesting investments in technology that could help the nation’s productivity rate. Capacity utilization rose to 78%, the highest level in nearly three years but still shy of the long-term average of 79.8%, above which economists begin to worry more about inflationary pressure. That average hasn’t been reached in almost a decade. 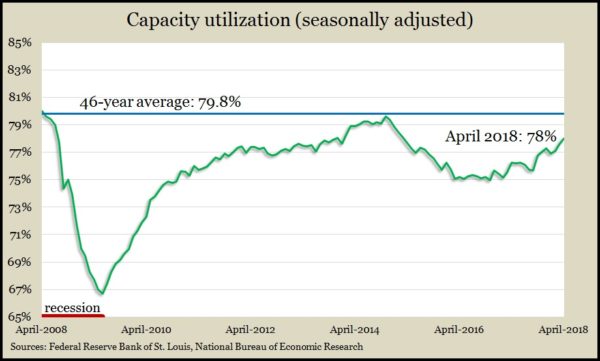 The Commerce Department reported that the annual pace of both housing starts and building permits slowed in April. Construction started at an annual pace of 1.29 million houses, down 3.7% from March, which was the highest level since 2007. Multi-family houses – a smaller and more volatile subset of the category – led the decline. Building permits suggested further construction, easing down to an annual pace of 1.35 million units. Permits have been above their level just before the recession for 24 months in a row.

The four-week average for initial unemployment claims fell to the lowest level since December 1969. The moving average declined for the fourth week in a row and is 40% below the 51-year average, which it has been below every week for more than five years. The Labor Department indicator suggests employers continue to be reluctant to let workers go. That should boost hiring and wages, which should fuel consumer confidence to spend more.

The Conference Board’s index of leading economic indicators continued to advance in April, moving up 4% from March. Labor market components helped the index keep climbing, which the business research group said suggests further “solid growth” of the U.S. economy into the second half of the year. The six-month trend slowed, however, in part because of the stock market correction that began in February as well as a bumpy housing market.