A key measure of consumer spending—retail sales—declined 0.2% in April, despite an increase in sales at gas stations, fueled by higher prices. The Commerce Department said that six of 13 retail categories had lower sales in April, led by home-and-garden centers and electronics stores. Strong gains in March softened the April letdown. Year-to-year, retail sales rose 3.1%, below the long-term average of 4.3% and down from 3.8% in March. Consumer spending accounts for more than two-thirds of U.S. economic activity.

The Federal Reserve reported that industrial production dropped 0.5% in April, including manufacturing, utilities and mining. Manufacturing output decreased 0.5% from March and was down 0.2% from April 2018, reflecting slowing global economic growth. Capacity utilization fell to 77.9%, the lowest level in 14 months and further below the long-term average of 79.8%, above which economists begin to worry more about inflationary pressure. That average hasn’t been reached since April 2008.

Business inventories were unchanged in March, while sales rose 1.6%, according to a Commerce Department report. Year-to-year, inventories rose 5% while sales increased 3.7%, suggesting an imbalance between supply and demand, which can affect companies’ responsiveness to changing business conditions. The inventories-to-sales ratio was up slightly from March 2018.

The four-week moving average for initial unemployment claims rose for the fourth week in a row following the lowest level since November 1969. The average was up 2.2% from the week before and 11.2% from four weeks earlier but was still 36% under the 52-year average, according to data from the Labor Department. The indicator suggests employers continue to be reluctant to let workers go, which should boost hiring and wages and raise consumer confidence to spend more.

The Commerce Department reported that the annual pace of both housing starts and building permits increased in April, although mostly because of higher activity in multi-family apartments. New construction of single-family residences rose from March, which could help the long-constrained inventory of houses for sale. But permits for single-family housing, which tend to predict future construction, slowed for the fifth month in a row, reaching the lowest level since late 2016. 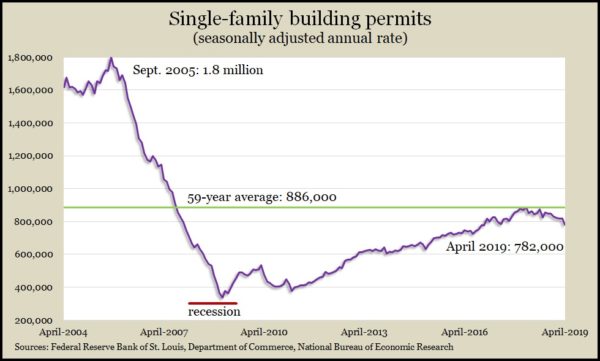 The Conference Board’s Leading Economic Index rose 0.2% in the month of April following a 0.3% increase in March. Gains for the month were primarily driven by contributions from stock prices and consumer expectations of future business conditions. The manufacturing data component was the most notable negative contributor in the report.

The early May reading for Consumer Sentiment came in at the highest level in fifteen years. The move higher in the index can be attributed to the large jump in the expectations index which also rose to the highest level since 2004. Notably, the data was compiled prior to the recent re-ignition of the US/Sino trade conflict.