A key measure of consumer spending – retail sales – budged 0.1% in April after strong gains the previous two months, including the biggest increase in four years. The Commerce Department reported that eight of 13 categories had higher sales in April. Excluding volatile automotive and gasoline sales, retailers suffered a slight decline in April. Year-to-year, retail sales grew by 4%, down from the long-term average of 4.5%.

Business inventories rose 0.4% in March, lagging a 1% increase in sales, according to a separate Commerce Department report. After a few months of overbuilding, the inventories-to-sales ratio has leveled off, indicating that companies are getting leaner, thus better to ramp up production or boost hiring if demand continues to improve.

Inflation on the wholesale level grew at its fastest 12-month pace in two years in March, led by higher food costs. The Bureau of Labor Statistics said the core Producer Price Index – excluding food and fuel – increased by 1.9%, near the overall inflation rate at which the Federal Reserve has indicated that economic growth could be self-sustaining.

The Federal Reserve reported a dip in industrial production and capacity utilization in April as demand for utilities dropped back to normal levels following severe winter weather. Still, the overall output of factories, mines and utilities remained higher than before the Great Recession. And the March rate for capacity was revised up to the highest point since May 2008. The data suggest the economy can continue to grow without riling inflation soon. 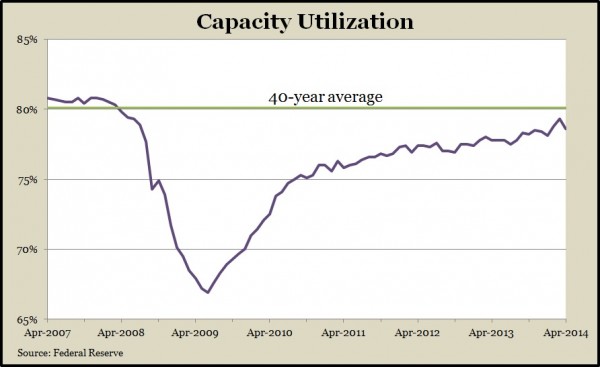 The moving four-week average for initial unemployment claims fell for the first time in four weeks. Labor Department data showed jobless claims down 5% from the year before and 51% below the recession peak set in April 2009. Current levels show continued employer reluctance to let go of their workers.

Offering another indication that inflation may be inching closer to the Fed’s desired rate, the Bureau of Labor Statistics said the Consumer Price Index climbed 0.3% in April. Year-to-year, the broadest-based measure of inflation rose 2%, or 1.8% if you exclude volatile food and energy prices. The Fed has targeted 2% as an acceptable inflation rate for sustainable economic growth.

By some indications, the housing recovery peaked in 2013, but housing starts rose 13% in April, the third monthly increase and the fastest pace of new construction since the post-recession high in November. According to a joint report from Commerce and the Department of Housing and Urban Development, building permits – a leading indicator of housing starts – rose to the highest annual rate since June 2008, but multi-family units have been driving the gains. Permits for single-family houses are down from a year ago.