The broadest measure of inflation showed severe constrictions in demand in April. The Consumer Price Index receded 0.8% from March, its biggest decline since the Great Recession. The plunge in prices was led by a 20.6% decline in gasoline, the Bureau of Labor Statistics reported, but prices also retreated notably for car insurance, clothes, air fares and lodging. Excluding the volatile categories of energy and food prices, the core CPI fell 0.4%, the most in 63 years of data. Year-to-year, the core CPI rose 1.4%, the lowest in nine years.

Inflation on the wholesale level also contracted in April, reflecting weakened demand worldwide with the coronavirus pandemic. The Bureau of Labor Statistics said its Producer Price Index fell 1.3% from March, the most since the measure began in 2009. A 19% drop in energy prices led the decline. Excluding the volatile costs for energy, food and trade services, the core PPI receded 0.9%, the most on records going back to 2013. The core PPI marked its first-ever year-to-year decline, falling 0.3% from April 2019.

The four-week moving average for initial unemployment claims declined slightly for the fourth week in a row but at more than 3.6 million, remained more than 10 times the average level since 1967. More than 36 million dislocated Americans have filed claims for benefits since the middle of March, according to Labor Department data.

Consumer spending accounts for the lion’s share (nearly 70%) of U.S. economic activity. Retail spending makes up about one-fourth of consumer spending. So another sign of how the pandemic is devastating the economy was a record 16.4% decline in retail sales in April. The Commerce Department said online stores was the only one of 13 categories to increase sales from March. Of the other 12 categories, 11 had double-digit percentage losses, led by a nearly 80% decline among clothing stores. Overall, retail spending has dropped 23.7% from its peak in January, falling to the lowest level since August 2012. 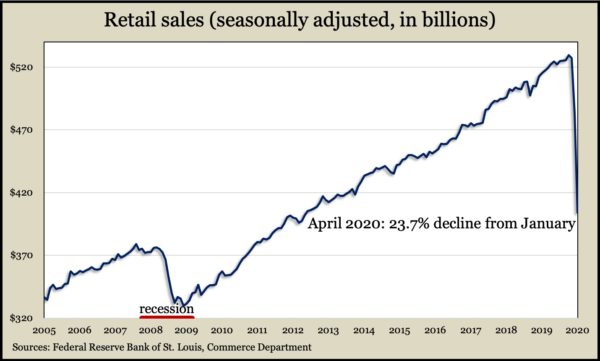 The pandemic also hit the nation’s industrial output, which declined a record 11.2% in April, including a record 13.7% reduction in production by manufacturers. The Federal Reserve reported that total production, including mining operations and utilities, fell to its lowest level since February 2010. Factory output was the lowest since August 1997. Overall, factories operated at 61.1% of their capacity in April, the lowest on records going back to 1948.

The University of Michigan said consumer sentiment rose slightly in early May after historic declines in March and April. The survey-based report suggested economic stimulus payments and lower prices encouraged consumers about current conditions, although their outlook continued to fall to the lowest level in six years. When asked to rank their concerns about the pandemic, consumers again listed health first, followed by social isolation and then finances. In April, finances ranked as the second-highest concern.